Oh my goodness, I'm typing this on Friday - almost melting in the heat. Rain is forecast and let's hope it comes soon! It's been way too hot to even think about baking cakes and scones. We've got umpteen fans whirring away day and night, sadly UK houses aren't fitted with air-con as our climate is usually much less extreme. And Dudley has a towel, run under cold water and then wrung out to lie on - which he loves. The tiled floors, usually his place to cool down, all feel warm and even his cool mat isn't coping!
Here's my snippets card for this fortnight: 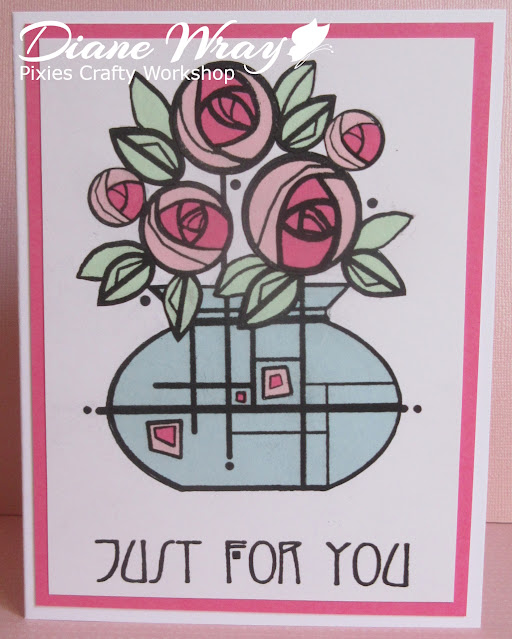 
- 5.5" x 4.25" white card blank, side opening
- a snippet of white card trimmed to 5" x 3.75", onto which I stamped the vase and roses image plus the sentiment using a small Misti and VersaFine Clair 'Nocturne' ink. The vase stamp is Woodware's 'Deco Roses' and the sentiment is from Woodware's 'Deco Sayings' set of sentiment stamps
- then removed the sentiment from the Misti lid and used four different snippets of coloured paper to stamp the vase and roses onto each one
- and this is the point at which I truly thought I had heatstroke and had lost the plot altogether as I then carefully paper pieced over the whole image using fussy cut pieces from the stamped coloured paper
- once that was all done I then used another piece of white card and covered it with double sided medium weight adhesive sheet and carefully covered it with a piece of the deep pink paper so I had some 'body' to play with
- trimmed the deep rose piece to 5.25" x 4" and glued it to the card front before glueing the image panel on top - using Collall glue

Just in case anyone thinks I cheated and just coloured the image - here's some small pieces of the leftover paper: 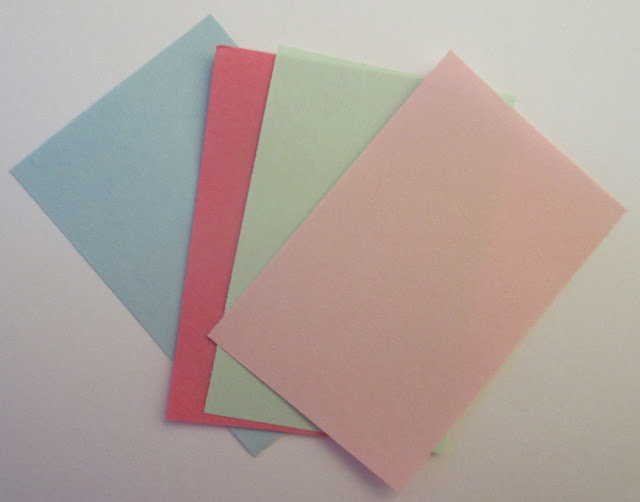 Despite it being fiddly, and it taking quite a while it was a fun card to make. Always add the glue (using a glue pen) to the main image by the way - the lovely Jules told me that tip many, many moons ago!
Woodware stamps often lend themselves well to paper piecing - although I could have coloured it much faster using Pro markers. So, it's not something I'd do frequently with plain paper when markers would work instead. I just thought that even slightly patterned paper would detract from the simplicity of the Art Deco look and had my heart set on paper piecing.
Len thought I'd coloured it until he felt the image - so that's why I added the little pieces of paper to this post. By then, the leftovers from the fussy cutting were in the recycling bin, which is a shame as they would have been a great illustration of what a numpty I can be in terms of setting the bar high - but I did find a few more snippets to prove the point.
In fact, I did a bit of a boo-boo when adding the blue vase to the image and didn't have a rose stem properly lined up with the line on the vase (OCD again!), so I cut out another leaf to hide it.
And bless Len, he remarked 'it has a sort of Art Deco look to it' when he'd inspected the card ☺
And needless to say, here's the prize for this fortnight: 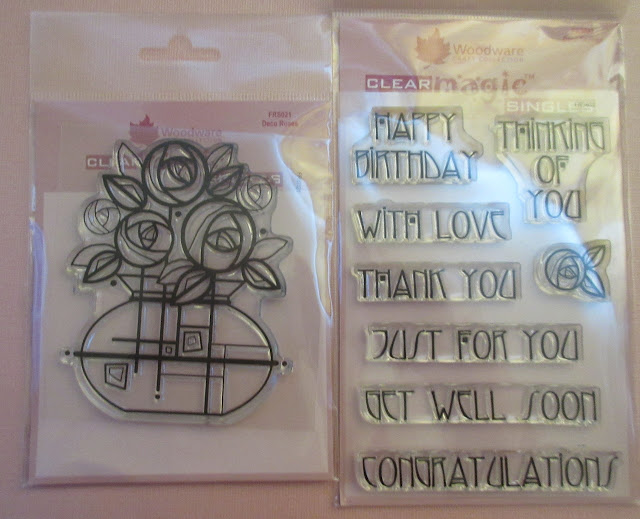 Bad photo but I only just noticed and don't want to do it over again. It's a 'Deco Roses' image stamp and a set of 'Deco Sentiments' - both by Woodware. Both very recent purchases - I thought it was time for a less 'cute' prize!

As always, the Snippets Challenge will run for two weeks and the Playground gates will close at 11am UK time on Saturday 11th July. The gates will open again at midnight UK time on the same day.

We're so glad that Dudley had his full grooming session before this current heatwave. He still has a full brush and comb each day, even though his coat is shorter - but thankfully not shaven down to the skin. I figure it's important to keep up the regime regardless so that he's used to it. He still ain't too thrilled and seems to know when we're nearing 4pm each afternoon. His balancing on his haunches is totally perfect these days - but then so are my bagpipe tactics!
Speaking of dog's toys - I wrote about Stinky Monkey the other week and how much Dudley loves him. Someone I follow on Instagram has a real dilemma. She lives in Germany and has the sweetest little girl Havanese called Bella - and Bella adores a particular toy made by Beeztees like this:
It's like a flat 'Knuffie' comfort toy with a dog's head, floppy ears and legs. Marion has searched high and low for a replacement - luckily she does have the one above as a spare but, much like 'Stinky Monkey' it will be loved to death before too long. This is a really long shot as a few of us have been searching on line with no luck. We found 5 in Malta but they won't post to Germany, the UK or even Italy. The Netherlands looked like a good lead but that came to nothing - so now I'm appealing to you. Take a look at Bella as a little puppy - she was so much like Dudley in this photo:
As I say - it's such a long shot. I believe some have been located in the USA but the suppliers won't post overseas either. If you manage to find one, or even more than one - can you please let me know. I'll very happily pay the cost of purchase and post and packaging. Bella is such a little darling and so like our Dudley - it would be amazing if we could hit lucky! I suspect it's no longer manufactured but perhaps a shop - on line or even a local store - might have some. It's at least worth a try!
I haven't posted off the 'shammy' prizes as yet - to be honest it's been way too hot to venture out in the car, so far, this week. I'll pop a quick post on here when they've been safely posted.
And, as I used new stamps for the very first time, it means I can join in with Darnell's NBUS #15 challenge HERE - once again!
Really sorry that my commenting has been very slow in the Playground - huge apologies. Blame the heat! x
One final thing, am wondering if anyone has tried an 'Ink on 3 - Fadeout ink pad' yet? It's supposed to be a marvellous innovation for 'no line colouring'. I wasted used an afternoon playing with a newly delivered Fadeout pad and various stamps, with the correct sort of card, to make my Rudolph Days card. Perhaps the images were too intricate as I chose a set of SU little Christmas mouse stamps with really fine detail but so far the jury is most definitely out. And ruminating! The best results were from using Zig pens, followed by Pro markers, Distress Inks were not good and am ready to throw my DI markers out to be honest as they never were much good and the ends have frayed, come on Tim, you can do better than that - and so far my Polychromos pencils are a waste of time. Perhaps they need to be water colour pencils. My efforts are too embarrassing to show, let alone use for cards - but I suspect that well watered down Zigs or good old watercolour palettes - and floral images could work well. Even though they say Copics etc. will work well. So it was a lesson at least. Some images really DO need the outline definition as well - regardless.
If anyone really is interested, I will, rather reluctantly but it may help, do a post showing my results - at least with undiluted Zigs and Pro markers so you can see the outcome. And be warned before you jump in.
So now, on Sunday, thanks to wasting time on that flipping ink pad, I'll be in a panic....... making my entry for June's Rudolph Days Challenge over at ScrappyMo's! Quick, come and play!