Running in at the last minute for March's Rudolph Days over at ScrappyMo's - huff, puff!

I've long admired a particular set of MFT Christmas stamps and matching dies - and finally succumbed to temptation. This is their first outing: 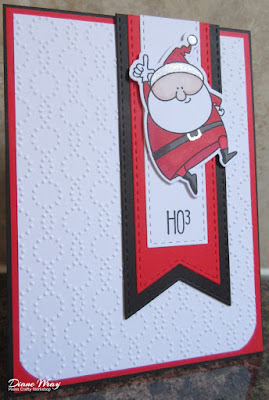 - stamped the dancing Santa using a stamp from MFT's 'Jingle All the Way' set of stamps and coloured it using Pro markers, clear Wink of Stella on the hat trimmings and Signo silver on Santa's belt buckle

- finally, popped Santa onto the strip of flags using thin sticky pads - after adding the layers of flags I already knew it was thick enough to be a Large letter anyhow, plus the extra dimension seems to make Santa 'pop' a bit

My card (in fact I made four identical ones!) is a CASE of a card made by Julie Dinn of the MFT Design Team, back in November 2014. I had no idea the stamps had been around that long to be honest - as usual, I'm late to the party! Julie's blog is so worth looking at by the way - one very talented lady!

Well I'm looking at one talented lady right here. Fabulous card my friend. Email coming and I won't bin it this time. Hugs Me.

Just love this card, Di, very striking in red, white and black. Such a cute Santa too. Super embossed background, I've not come across that folder before. x

This is stunning Di, The flags are a great idea

I've always loved this set and love how you've used it, Di! That HO3 always makes me stop and think for a second! I'm so dense, lol!! Hugs, Darnell xxoo

Aww, very sweet. The positioning on the banner makes it look as if he's sliding down a chimney. Lovely card
Jane

I coveted this set when Kathy K was using it late last year - haven't succumbed yet though! He is a VERY jolly Santa.

Love your card - so joyful.

What a brilliant card Di...I love it (them...LOL!) Have a lovely weekend xxxx

I had to think about that sentiment for a minute too...lol. I love this card and the cute Santa Di. and the red white and black is very striking. x

Di, this is great, using a Santa stamp in this way!
Lia xx

Such a brilliant and so fun card!! Fab Santa and sentment and a great design, too!!

Hi Di,
what very lovely card and your design is so fantastic and perfect too.
Love the wonderful cute Santa, and you have coloured hime perfectly also.
Thank you for joining the Rudolf Challenge.
Lots of crafty love. Jenny L. DT

Great CASE. The black/red/white color combo is so striking.

Hi Di, I tried to leave a comment earlier but my computer wasn't playing nicely. Anyway, what I said was that this is a great fun card - love the cheeky Santa, the colour combination and that embossing folder is fab. I also said something about being late to the party was nothing to be bothered about - this stamp was worth waiting for :) Hugs, Elizabeth xx

This is an adorable Santa. I agree with the posted above who said it looks as if he is sliding down a chimney!
Fabulous Christmas card, Di.
Thanks for taking part in the March Rudolph Days Challenge

I love your gorgeous Santa Di, and the great embossed background too.

A super card Di. I love your happy Santa. Barbxx

OMGoodness Di, I am loving your sweet Rudolph card! I can see why you succumbed to this stamp set, it's so stinkin' cute! Love the Santa and I love the way you colored him-he is certainly decked all out for his debut! I also love your embossed background, this is certainly one fabulous CAS Christmas card! Hugs, Brenda

So adorable Di!! I LOVE that Santa. He was originally offered as a digital image through the artist, and later made into a stamp for MFT. He is so fun and you just have to smile when you see him jumping for joy. :) xx

Not seen this set before but love it, superb card with a great design.

Adorable Santa and I love the sentiment. My kind of humor. Grin.
Hugs,
Em xoxo