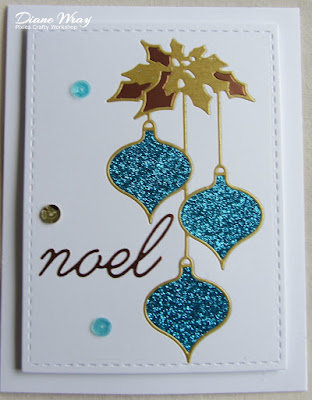 This is so beautiful! I LOVE the colour combo and the pretty sequins too.
Great tip about running thru the machine again!

I agree it's a scrummy colour combination but no time! I did have an idea so must try and get it made. Your card is very elegant and sparkly. Len saves the day again. X

A stunning card Di, I love the gorgeous blue glitter of the baubles.

Beautiful card Die and so well worth all your hard work.

it's wonderful!
have a great day!

Love the look of this sparkly Christmas card Di. TOP TIP about the inlaid die cutting too! TFS.

It's really a fabulous colours combo and the sparkling turquoise adds other interest!! Amazing card and great way to use the die, love so much the inlaid diecuts!

This is a beautiful die and what a bright and pretty card you have made with it Di, and I simply adore that gorgeous turquoise glitter paper which certainly adds some pizzazz. x

You knocked this color challenged out of the park! Really lovely Christmas card, I love the glitter!

Don't know what the heck is going on here tonight with Blogger, having a dreadful time trying to comment.

Love this card, as you say great colour combo and love the baubles and Len has certainly caught the colour here, I have a few cards that will be difficult to photo, so could you send him up with his camera to take mine, cards that is not photo's of me.

Oh my!!!beautiful glitter and the combo with the gold, sooooo nice

So elegant, a gorgeous Christmas card. I love all of your design elements Di, thanks for sharing at Merry Monday.

Lovely!
Thanks for joining us at CraftyHazelnut's Christmas Challenge Extra for March!
Monica - DT

Diane, I agree these are gorgeous colors together...you card is so very pretty,the ornaments really shine through and I wouldn't mind having that color hang on my tree! thank you for sharing this at Merry Monday!

You are right: this colourcombi is gorgeous. I would never have thought about it and I like your card very much!
Lia xx

Lovely, lovely card Diane! These colors really do work so well together don't they?! Glad you enjoyed playing along and thanks so much for sharing with us at Merry Monday!! :0)

WOW! This may have been hard to photograph, but the beauty came through! LOVE IT!

Love, love those baubles! Thanks for entering both of my CHNC challenges with your lovely crafting - hope to see you again soon. x

Absolutely gorgeous!! Great card Di ... beautiful colour combo (I had fun playing with it too). Love the shimmer and sparkle from your glittery ornaments. Good job by Len to take the picture. xx

Such gorgeous sparkly baubles! What a fantastic card.