Recently I stumbled across a really old but very cute 'punch art' Santa hat on line, made using SU punches. There were no instructions, apart from a photo of the pieces, but the idea is very clever (IMHO) so it was very much a case of playing around, plus I didn't have one of the punches that appeared to have been used so had to improvise and this was the end result - and I made five cards all the same in a single 'batch bake': 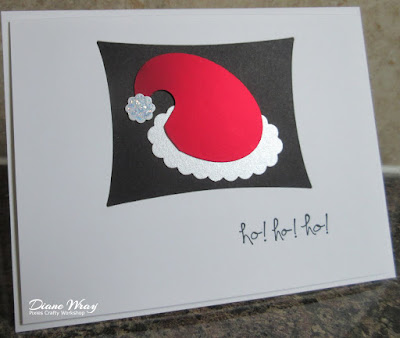 And these are the punched pieces I started off with - just to put the punch art into context, I'll explain below: 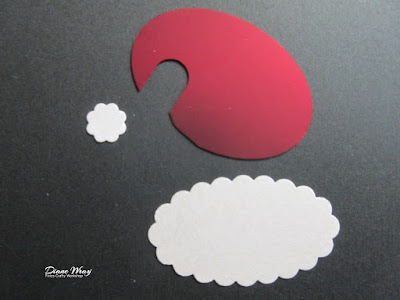 Get the idea? On the photo I found there was also a plain oval punched out of the centre of the white scalloped oval - and that's where I improvised. Read on for more detail:

- the same white card stock, which is slightly off-white - mistake to buy an unknown brand on line, lesson learned! I cut a panel just slightly smaller (eighth of an inch all round) to the card blank

- then I die cut an aperture into the panel, using a Spellbinders 'Wonky Rectangle' die - having tried almost every other die I owned against the little prototype hat I made. That's one of my tips for today - especially if you want to make a batch of cards, take the time to make a little prototype, it will repay you in shed loads!

- next I backed the aperture with a snippet of black card stock, and added it to the card front using a layer of fun foam to lift it a bit

- I had already used punches to make the hat elements, shown above. I used snippets of course and one was deep red satin mirri for the 'cap' of the hat - using SU's 'Extra Large Oval' punch, and then I just cut a little rounded piece out of the hat using one end of the SU 'Word Window' punch

- my solution was to slightly trim away a small curve from the back part of the hat, just below the 'notch' I'd punched in to form the cheeky pointed part so that the line of the red followed the white 'fur' trim of the hat and sit the red part of the hat on top of the white scalloped oval rather than slot it through an aperture - and it works just fine. And if you followed that little explanation - take a quick go on the Playground swings!

- all that was left was to glue the three parts of the hat in place, using a fine line glue applicator and Collall All Purpose Glue - before adding the finishing touch of 'Icicle' Stickles to the hat bobble

I always leave adding Stickles and Glossy Accents until a card is completed - had too many accidents in the past trying to play with teeny embellishments and said sticky stuff :) Plus, I play safe and either use a fine line applicator for Glossy Accents or, for either, squeeze some onto a small piece of paper to work with and add it with a fine paintbrush.