It's Len's Birthday tomorrow and I know he doesn't peek at the blog so it's safe to post the card I made for him on here. Just watch, he'll now decide to take a look!

Anyhow, here it is: 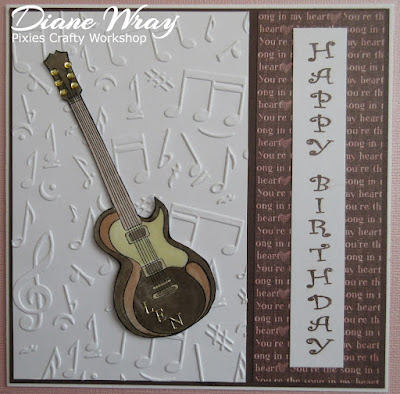 - an embossed panel of white card, kindly sent to me by a lovely buddy after I'd admired it on her blog - the folder is by Crafts-Too. I trimmed it down and glued it in place. My card's layout is not dissimilar to my lovely buddy's either

- added a piece of patterned paper from a LOTV paper pad called 'On A High Note' to the other side of the card front - I love the almost hidden words which say 'You're the song in my heart' :)

- stamped the sentiment using Brilliance 'Pearlescent Chocolate' ink and a pre-loved 'no name' wood mounted stamp, trimmed it and glued in place

- I coloured the image using Pro markers to tone with the patterned paper (as best I could!), fussy cut right round it and ran a black Whispers marker right round the edges

Len  was in a group many moons ago and he personalised his guitar at the time very much the same with LEN, so I think that touch will make him smile :)