Well, that was quite an exciting few days away for sure! It's Tuesday as I'm typing this and am still recovering. At some point I'll write up the saga but right now am chasing my tail trying to begin commenting on this week's Playground entries! Please bear with me.

Len's Birthday is coming up in about 10 days time so I need to make his card plus a few other special ones in good time - as well as playing catch up, things have crept up on me a bit!

Meanwhile, I'll show just one thing we made in one of the four workshops last Friday: 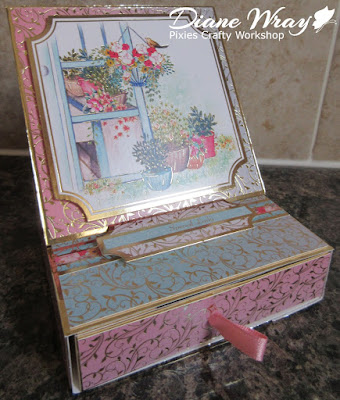 The workshop was a Hunkydory one where we started off with a kit called 'A House for Flowers' and it's an easel box card - which I had to finish off at home. It was the least messy of all the workshops, loads of measuring, cutting and taping though - just my kind of crafting!

Also made a craft caddy which I finished off today - had to do it else it would never have been done! That was a tale in itself and it's already a white elephant here I'm afraid, sigh.

And, if you've never played with Powertex then you really are missing a treat. Great fun, very messy and the results are fabulous! Got you wondering now?! Watch this space :)