Tricks with the Misti - #1 - 'Sentiment Backdrops'

I have no idea whether I'll be pointing you in the direction of just this one, or perhaps more tricks using the Misti. I was actually looking to see if there was any way to use the Misti to more easily stamp those multiple layered flower stamps that are so popular right now when I found a different technique on Jennifer McGuire's blog, entitled 'Sentiment Backdrops' HERE. That lady is so talented! I loved what she made and couldn't wait to try the technique out - here's my version: 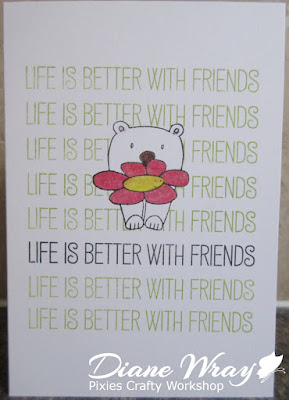 - first of all I placed the one line sentiment and the little bear exactly as I wanted on a sheet of the pink grid lined paper which comes with the Misti. I'm a bit ashamed to admit I'd never worked out just how to use the grid lined paper, relying instead on  placing the stamps where I wanted them on the actual card front and then checking they were totally straight on the grid lines on the Misti cover - Dumbo! I also now need to produce a grid on acetate which I read about a while ago - I know that Simon Says Stamp sells them in the USA, but the Misti website also has a free download and I have some printer friendly acetate already as well

- then removed just the little bear stamp and popped him onto an acrylic block before stamping a few Post-Its with the image. My Post-It's don't have a full covering of 'sticky' on the back but I like the fact that they're yellow and easy to see and handle

- after finishing all the stamping removed the mask and coloured the little bear's nose, ears and the flower, using Whispers markers

These cards are 'Parsnip Specials' of course, to enclose with Playground prizes! He finally left his beloved 'pickled conkers' alone for long enough to wander into the craft room, hop onto the desk, borrow my specs and have a look. I did resist the urge to lock him in the craft room and rush off to empty the vinegar away - it smells like a pickle factory in here!

And I did a little bit of surgery on the bear stamp. First of all, I confess that I lost the original stamp and had to order another copy of the magazine to get a second bear - and you might know that the original bear turned up a day or two later! He comes with a little heart sort of 'floating' above his head - which was gonna be tricky for masking so I snipped the heart off one stamp and left it in place on the other one. Thereby justifying buying two copies of the magazine of course :)

I'm thinking that this technique would be great for Christmas cards too!

And, yes, I did find out how to use the Misti to stamp those multiple layer stamps accurately and easily. Just need to have a play!