I know a few of you are quite curious about the escapades of Kim, ValeryAnne and myself in Coventry - as well as more about what we made. Here goes!

First of all, Kim travelled up by rail and - as usual - I drove Miss Daisy up on Thursday afternoon. We'd booked different hotels (Premier Inns) so the first evening saw ValeryAnne and I scoffing in a very nice restaurant next door to where we were staying - and Kim, wisely, opting for a nice bath and an early night in her hotel!

Friday dawned bright and sunny and off we trotted to the venue by taxi, hauling our bags of 'required tools' for the workshops. Ha, quite a few of those weren't actually even needed - but hey, ho! Met up with Kim at around 9am and did four workshops over the day, with a break in the middle for the included lunch.

First workshop was to make this double sided caddy: 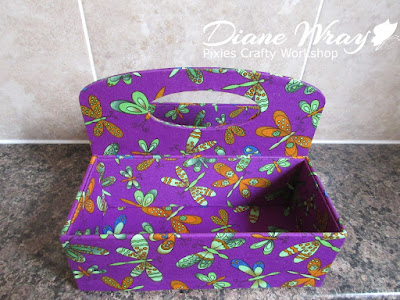 Looks pretty innocuous I know, but we started out with a piece of material, scissors, book binding glue and 14 pre-cut thick cardboard shapes to cover and glue together. I don't think any of us actually finished the project before it was time to move onto the next workshop.

The next workshop was the box/easel card I showed HERE the other day - again, a real rush and I finished it off at home. Made some boo-boos in the rush of the class but those are all fixed now.

Break for lunch - and a much needed respite from the pressure.

After lunch it was covering MDF pieces to make a jigsaw 'frame' and I enjoyed that very much. It was a bit messy but the plus was that there was a good selection of products to play with - so long as you trotted round the room and found out who was playing with what! Need to do more work on that so for now it's 'under wraps'.

And the final session was using Powertex (which is best described here as thin moulding custard really!)- yay! General opinion is that it was the best of all the workshops, not too rushed, plenty of helpers and we each came away with a piece of finished work. We all made a small 4" x 4" canvas using Powertex, bit and pieces such as hessian, snippets of ric rac, slivers of shaped card, little torn pieces of corrugated cardboard - and even a wooden toothpick! After moulding the bits and bobs onto the canvas- Kim had thought ahead and brought some paper clay moulded bits so I have a butterfly as well as an almost hidden face (top left) - they were then sprayed with colour and dried with hair driers by the helpers. Final touch was to add some coppery highlights using a sort of mica powder with a drop of varnish to mix it up.

And this is the result: 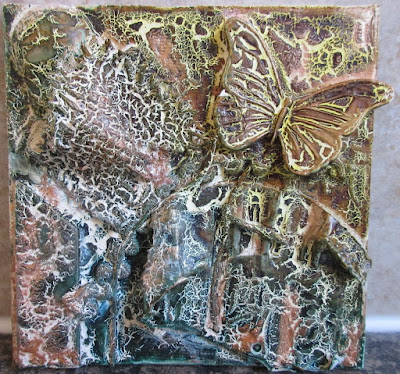 Shame the coppery highlights don't show up so well in the photo. This is destined to go in the centre of the jigsaw frame instead of the small mirror we were given - hence the need for some more work on the frame just to gently tie the colours together a little bit more.

When the day finished the three of us piled into a taxi and just spent the evening having an M&S picnic with some vino in my room.

Loads of things happened that had us rolling round in near hysterics over the weekend. I managed to lose that caddy TWICE, but still ended up bringing it home, sigh.

After Saturday's adventures around the stalls we bade farewell to Kim and headed back to the car to do the whole palaver in reverse - only this time loaded down with shopping of course. Got all the way back to the hotel and realised I'd only left the caddy in a bag in left luggage (long story, Kim and I got ours mixed up the previous day and had done a swop back on Saturday morning!). So back we went yet again - but this time I shot us through the main gate so at least it was a quick round trip!

On Sunday we played safe and once again left the car at the hotel after loading it with all our stuff ready for the drive home. And guess what? Sunday is actually a much quieter day and folk were parked on the main site on hard standing!

The highlight of the day was meeting Barb from the Snippets Playground, and her lovely friend Wendy. What a delight that was and Barb is absolutely as you'd expect her to be - warm, very sweet and up for lots of excited hugs too!

So that's it in a nutshell - I've had to leave a lot out but it was a real blast from start to finish!

My big regret is forgetting to take any photos while we were with Barb! All the more reason to meet up again though.

But, I did at least remember to take a photo of my 'partners in crime' - so I'll let them have the last word! 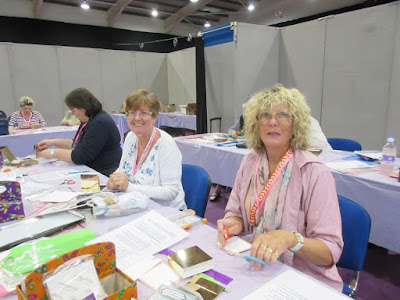 You'll just have to believe I was actually there :)

In fact, there are some photos of all three of us on the GBCF website now, beavering away with Powertex but am not sure about copyright. That's MY excuse anyhow.