The current challenge over at Merry Monday is 'Retro/Vintage'. Sorry, yet another Christmas card! Mr Mojo went for a walk so am trying to just plod on as best as possible and the one thing I never tire of is making Christmas cards.

Not being being able to sit for too long I didn't really want to make a Vintage card for Merry Monday, with all the extras that might entail as I always think of Vintage as needing 'frou frous' and such :)

So I went for a Retro look instead - I love the mix of the skyscrapers and the old fashioned street lamp - a bit like leaving Central Park in New York: 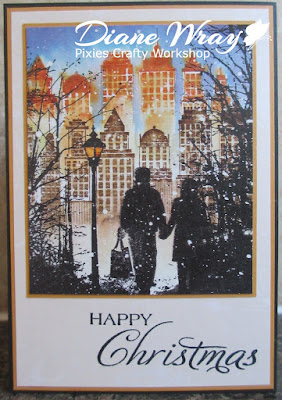 - A6 black card blank (to pick out the black in the image I used). The black card was bought at Coventry (with loads of other packs of colours!) and is really sturdy stuff. Sadly only available at shows right now, sigh

- snippet of SU's 'More Mustard' card stock as the next layer, topped with a layer of very, very slightly patterned cream paper from the First Edition 'Gilded Winter' paper pad - again to pick out colours in the image

- the image is a Penny Black Stickeroo from their 'Serene Season' sheet. I'd already seen this image glaring at me for months and kept dismissing it - how blinkered! Mounted the image onto white card first to hand trim it as (unusually, as PB are so tiptop in their products) there was a very narrow white border at the bottom edge. Trimmed that down then mounted it onto a piece of SU's 'More Mustard card

- glued the mounted image in place on the card front, with equal borders top and both sides

- final stage, it used to be risky but not with the Misti! Hey, I just came up with a new slogan!! I just copyrighted it as well so hands off!! I stamped the sentiment using Memento 'Tuxedo Black' ink and a stamp from the Inkylicious 'Seasons Greetings' stamp set - LOVE this stamp set

And, another one for the box!

I keep saying this, but my advice is to never, ever try and stick a Stickeroo straight onto a card blank- always mount it first onto card and then trim it - trust me, I learned the hard way a long time ago.

I know exactly who this card will be sent to. A friend just celebrated a special Birthday and she went, plus husband and family, on a trip to New York. Just like I was on my first trip to the Big Apple, she was totally blown away by the sheer enormity, height, buzz etc. of NY and I think she'll like this card :)