It's a lovely theme this week over at Less is More - use acetate or vellum. I flipped a coin, vellum won - and this is the card I made: 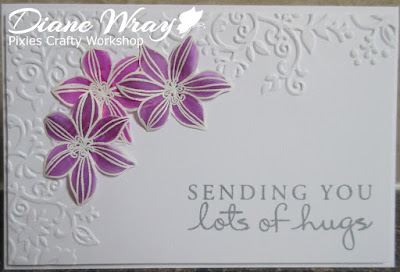 - snippet of white card, embossed using a Sizzix folder called 'Corner, flower vine' then trimmed to just an eighth of an inch smaller all round than the card blank

- I wanted the embossed layer to stand out from the card blank so followed a tip I found last week which is to not use double sided foam pads or tape as the card will likely become distorted in the post. Instead I cut a piece of white fun foam just marginally smaller than the embossed panel and glued it in place

- then glued the panel onto the card front. Using the foam certainly makes for a lovely even, raised panel and it's a trick to be used more here in the future

- coloured the flowers on the reverse side of the vellum using Pro markers and quickly dried the flowers using the heat gun (the alcohol ink doesn't soak in so will come off on your fingers if it isn't totally dry - ask me how I know!) The beauty of colouring on the back of the vellum is that the embossed white lines disguise any minor 'blips'/slips of the markers :)

Some tips about vellum. Do keep a little strip of vellum and try out your markers on the reverse before launching into colouring whatever you've stamped. It's really dramatic how muted the colours become once you flip the vellum over to the right side.

When colouring the vellum on the reverse it helps to work with a dark piece of paper or card underneath so that the white outlines stand out - and keep a piece of white card or paper at hand as a background to check how the colours are working out.

Also, my first attempt at attaching the flowers to the card from almost ended in disaster - Collall glue reacts quite violently with Pro markers on vellum and not only doesn't want to stick but will also lift the colour right off the vellum. Luckily I spotted it right away and switched to 'Glossy Accents' instead.

Finally, on my card above, I'd trimmed parts of a couple of the flowers too close to the white embossed line. Only noticed this as I was finishing off writing this post and I haven't changed the photo - but, those white lines are now back in place along the edges where I'd trimmed too close. Courtesy of my Signo white pen - which did need a little scribble on a snippet of ordinary paper to get the ink flowing. My guess is that it's because vellum is such a silky surface.