Funny old week here really. It appears that this awful stabbing back pain is more than just muscular and joints! Turns out to be a bout of shingles - a first for me, and hopefully the last! On so many different pills right now that if I jump up and down I'd rattle! Enuff of the medical stuff already - here's my snippets card for this week: 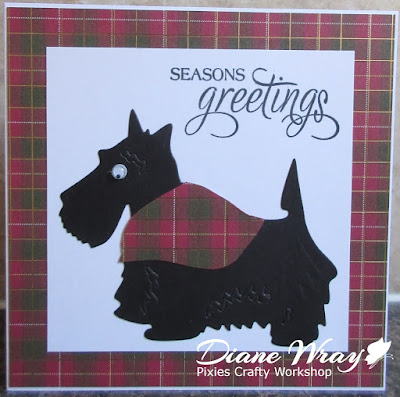 - 6" x 6" white card - to be honest it's a tad under that size as I check the 'supposedly matching' envelopes before making a card these days!

- snippet of black card stock, die cut using the Tonic Studios 'Rococo Scotty Dog' die' - I carefully saved the cut out pieces from his eyebrow, legs and underneath the tummy and am so glad I did!

- for this card I wanted a solid tartan coat but the die does cut out a 'Winter doggy's coat' area. So I die cut a sacrificial Scotty from a scrap of card stock and then hand cut around the total area that I thought would make a decent winter coat for him to cover those cut outs

- flipped the 'coat' template upside down and then drew around it in pencil on the back of a little snippet of the tartan card stock (doing my best to at least make sure the lines were parallel with the background panel). Doing the flip routine meant that I could draw the pencil lines on the white backing of the tartan card snippet where they wold be visible for the cutting process and it would be the right way round when I flipped the cut out tartan coat over

- found a snippet of white card stock, trimmed it to half an inch smaller all round than the tartan card stock, to leave a decent border, then used the Misti to position and stamp the sentiment using Memento 'Tuxedo Black' ink and a stamps from the gorgeous Inkylicious 'Seasons Greetings' set

- glued the white panel onto to the card front

- glued the Scotty dog, with his coat in place, onto the white panel and then popped the black die cuts I'd saved back into their respective places. I think that's an important step as online there are some cards which have been lovingly made but the cutouts have been left blank and it just looks a bit odd to me (IMHO of course)

Must search out some more tartan paper or card as this was such fun to make (once I worked out a few of the little tricks) and would be a lovely Christmas card for a few Scottish friends.

I'd like to enter this card into the current Merry Monday Challenge #218 where the theme is 'Plaid' - or 'Tartan', as we British call it.

Hedgehog update - the little perishers are going berserk! We think there could be as many as NINE different ones coming to feed over the course of a night. Len was awake in the early hours of Wednesday morning and heard a regular clattering from one of the hedgie feeding stations. At 4am he dragged himself into the garden to investigate (bless) and there was one very irate hedgehog - impatiently flipping the lid up and down on an empty bowl! I sure hope they all decide to have a sleep this Winter as we're becoming victims of our own success with them!

Lets move straight onto the weekly peek at the picks: 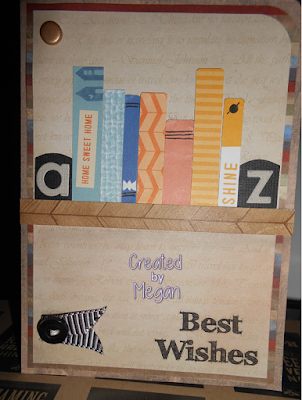 I think this is such a clever way to use up strips of snippets, by making them into book spines as Megan has! 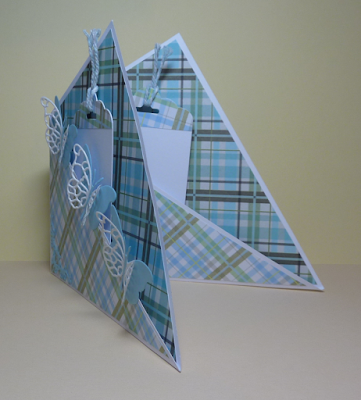 From Kim we have a 'twisted pocket' card - what a great design and I had no idea how it's done but did find a YouTube link which gives the general process very clearly. 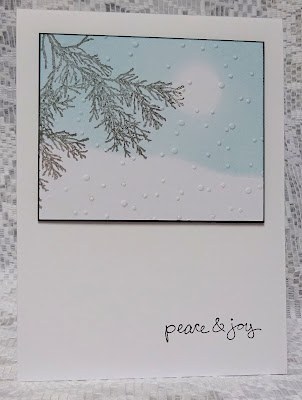 For anyone looking for a really elegant Christmas card design to do some 'batch baking', Viv's card above is a real beauty! 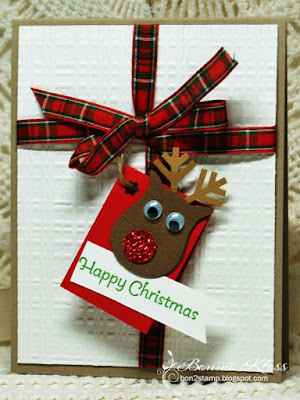 I LOVE this card, made by Bonnie as part of her Merry Monday DT work - where the theme is 'plaid' right now (hence my Scotty dog card of course!). Such a super idea to make a 'package' and that Rudolph tag is just so cute:) I worked out that the antlers are made from a punched snowflake! 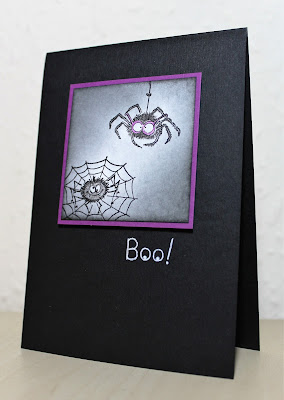 A touch of Halloween next, made by Helen. I love the simplicity of this design - and it's fun as well! Err, unless you're have arachnophobia I guess! 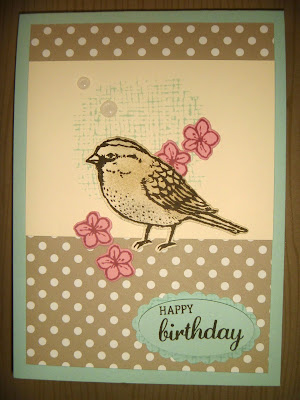 This is such a sweet card, made by April - using the SU 'Best Bird' stamp set, which is now on my wish list of course. Love how well the colouring of the bird goes with the polka dot paper. 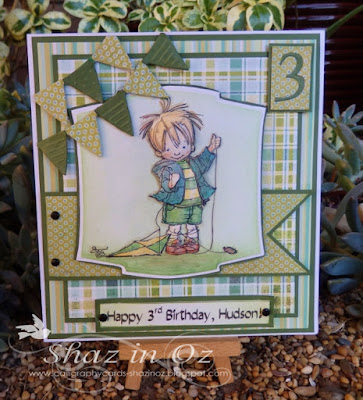 Totally adore this card, brought to share with us by Shaz in Oz. Wonderful use of lots of snippets and such a darling image as well. Beautiful work Shaz! 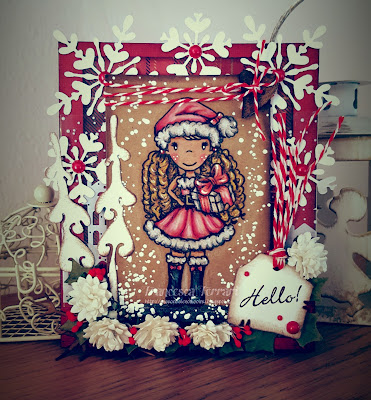 Francesca hopped into the Playground with this terrific Christmas card to share with us. I love all the little details and such a fun image too!

Calling a halt there - my time at the desk is almost up! But I just had to share this final pick of the week - made by Karen P. Such a pretty card with loads of snippets used too, The fascinating thing for me is that beautiful soft image and it did take me a while to work out that Karen had wrapped vellum over a coloured image. Clever stuff!

Vellum certainly is really popular right now - I see that this week's Less is More challenge theme is to use vellum or acetate.

We had no new Playmates last week but 55 of you came to play in total. Yay - what a lovely turnout and so many fabulous makes as well.

And it's prize draw time, for the prize from last week. Our winner of the Penny Black set of hedgie stamps called 'Loads of Love' is:

Congratulations Lia! Lia has been playing here since January and, although her lovely cards have often featured in the weekly picks, this is her first win - so I think that extra congratulations are due :) 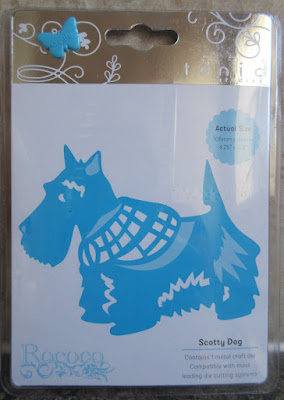 Yes, it's a die exactly the same as the one I used for the doggie (Tonic Studios 'Scotty Dog',  and you can see what I mean about saving the little cutouts. There's also the Inkylicious sentiments stamp set called 'Seasons Greetings'. I've used my own set a few times over the past few weeks on here (as well as today) and as people have already commented, the fonts are really lovely.

Some more snippets of news:

It's time for Rudolph Days on Tuesday over at ScrappyMo's - runs from 25th to the end of the month and an ideal opportunity to make a Christmas card with a sentiment on for Hazel's challenge, anything goes for Mo's challenge - and if you use a snippet then you can link up here as well!


And, Penny from sunshinepens rambles  has very kindly offered a pair of tickets to the Crafting Live Show at Peterborough, which is on Friday/Saturday 11th/12th November. I think the easiest way to pick a winner of these tickets is also to use Mr Random, although I do realise that Peterborough won't necessarily be easy for some of you to get to :) If you follow the link above you'll see that there are some really well known companies exhibiting their tempting wares! So, if you would like to win these tickets then just say so in a comment please and I'll keep a note and run the random number thingy before next week's post is up and running. I have the tickets electronically so you wouldn't have to wait for them to be posted.

The Snippets Challenge will run for one week and the Playground gates will close at 11am UK time on Saturday 29th October. The gates will open again at midnight UK time on the same day.

A maximum of ONE entry and please say in a comment if you wish to play and be a possible winner of the prize. I think both items work really well as a pair but if you have a burning desire for just the die or the sentiment stamps then please feel free to say and if your name pops out then I'll do a second draw for the item you don't want.Please also link back to the Playground in your blog post to be eligible for the draw.

Hugs from Parsnip - caught him rootling through my makeup drawer the other day, flinging stuff hither and thither. Only looking for green eye makeup .......... so he can plaster his face and whiskers in order to scare the local kids at Halloween when they come knocking!