The current challenge over at Addicted to CAS (#97) is 'Stitched'. I had several ideas for my entry but time was against me due to the impending 'expedition'. In the end I made this card literally in 10 minutes flat, probably a first for me! 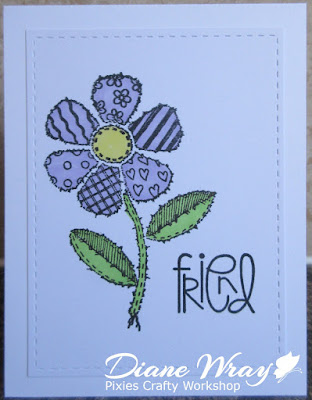 - added the word 'friend' using the Misti, Memento 'Tuxedo Black' ink and a stamp from the Paper Smooches 'Sentiment Sampler' set - oh how I do love those sentiment stamps!

- glued the panel onto the card front

It took longer to write this than to make the card! The photo has a slightly blue tinge to it on my screen here - it's a pure white card and background I promise :)

And to think, I'd never used this stamp before despite having it for ages. It was one of those buys when you just don't feel it's right somehow. I think it's because each petal on the image transfer on the wooden back of the stamp is a different colour with the detail all coloured in different colours too - and it looks quite garish.

I even offered it for sale on here a while ago and was totally underwhelmed by a rush of interest, then I thought I'd just give it away at some point and popped it into a box of slightly unloved stamps that I didn't think I'd ever use again.

Got that one wrong - keeping to one colour for the petals has made me love the stamp all over again :)