It's a lovely theme over at Merry Monday again this week - 'Keep Warm'. I knew almost right away which stamp I wanted to use for my card - it was then just a matter of planning the card itself - and this was the end result: 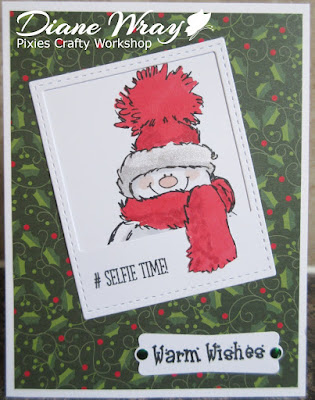 - next I took the scissors to the full sized snowman I'd stamped and coloured and chopped him down so that he looks out of the photo frame - carefully cut his scarf so that it hangs outside the frame too. Then glued the image into the frame

- stamped '# SELFIE TIME' using the Misti, Memento 'Tuxedo Black' ink and a newish set of stamps that I spotted over on one of your blogs. It's called 'Good to be Bad' by Clearly Besotted - that # stamp is so tiny, bet I lose it before too long!

- I wanted a sentiment to allude to the 'warmth' aspect of Snowy's hat and scarf and used Memento 'Tuxedo Black' ink again, plus a stamp from a really old Whimsy Stamps set called 'Winter Notables 1 Sentiments', to stamp a sentiment which I then punched using SU's 'Modern Label' punch

Another one for the box! And I'm down to just one small scrap of that green LOTV holly patterned paper now, sigh :(