Merry Monday is back after their Summer break - whoop, whoop! And what a great theme they chose for this week's challenge too - 'Gold, white and black'.

I knew right away what I wanted to make as my entry - and here it is: 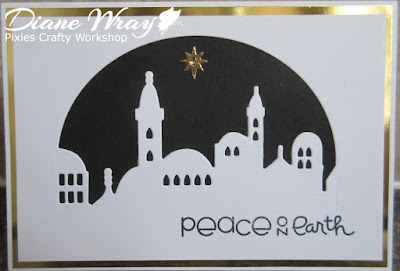 - piece of gold mirri card, trimmed to just slightly smaller than the card front and glued in place

- piece of white card stock, trimmed to an eight of an inch all round smaller than the gold layer

- at that point I used the Misti to stamp the sentiment, using Memento 'Tuxedo Black' ink and a sentiment from the Paper Smooches 'Christmas Sampler' stamp set

- glued the star in place and popped a little gold gem in the centre. The little gold gems are so lovely, sadly no name to them though. Bought ages ago at a Craft Fayre and they shine like real gold, not the orangey amber of (say) Kanban gems

I made three of these cards, all the same, and they didn't really take all that long either. If I'm upcycling a Christmas card then it's a one-off of course, but when there's a few things assembled such as dies, stamps etc. to make a Christmas card it makes sense (to me!) to make more than one for the Christmas card box. I've learned that three is a nice number to go for.

I'd also like to join in with the following challenges: