........... I'm not sure there'll be a repeat performance.  I completed my very first, and also possibly very last, attempt at 'mixed media'. Having accumulated loads of stuff to play with, for about the past couple of years or so, finally bit the bullet - on Friday afternoon of last week. I then had a further play on Saturday afternoon, Sunday late afternoon, Monday afternoon and then finished it off on Tuesday morning. I make that five different days!

I'm not sure I can be doing with so many steps and stages, the horrendous mess and a desk looking as if a bomb just went off! I'm a clean as a whistle kinda crafter, my stamps are all pristine and kept meticulously clean, everything is put away again once I've used it - and I hate having half finished stuff hanging around waiting to dry or for the next stage.

Anyhow, after the good ole moan - this is the end result: 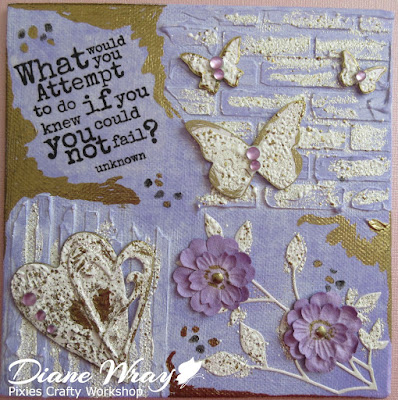 I used (I've only written it down here as a reminder in case I ever lose the plot again and decide to have a second go!):

- 6" x 6" Clarity stamp canvas board, which I covered with white Gesso

- once it was dry I then painted all over the canvas with acrylic paint - a mix up of Violet and White to produce Lavender, then left it to dry. I know I could have used the heat gun at various points but I was curious to see just how long it took for each stage to dry naturally

- once dry it was too bright, so I painted all over it with watered down white acrylic paint and used a baby wipe to just dab away until I'd lifted enough of the white to produce a more pleasing shade of lavender

- I had a rough idea of what I wanted to add into the canvas and next I die cut the leaves, hearts and butterflies out of white Centura Pearl card to get an idea of how they might work. Too stark by far and way too neat

- so, I stuck the leaves in place using Ranger Multi Medium Matte - which confirmed the starkness - gulp

- out came the embossing ink refill fluid and a brush - plus some Stampendous 'Shabby White' Frantage embossing enamel and I embossed the butterflies, heart and also added some Frantage to the leaves

- still too stark - so I brushed more embossing fluid onto the bricks and stripes on the canvas, scattered with more Frantage and embossed that. By this stage the entire craft room was sparkling with tiny little pieces of gold from the Frantage

- ha! So now the butterflies and hearts totally blended into the backgrounds didn't they? To counter that I took a broad nibbed gold calligraphy pen and went round all the edges of the butterflies and the hearts - as well as adding a few scribbles to the fronts as well. It looks just like gold leaf in real life.

- the sentiment is from LOTV's 'Life's Journey', stamped onto the rough side of white tissue paper using Stazon 'Jet Black' ink and then the edges torn (not cut, straight edges wouldn't blend into the canvas well - that much I did know!) around very carefully. Then stuck the sentiment in place using Ranger Multi Medium Matte

- the leaves needed some flowers so I found lavender flowers in the neglected box of flowers, added white brads and hot glued them in place. Didn't like the white brads after all so coloured those using the gold calligraphy pen and tickled a little bit of gold around the centres of the flowers

- hot glued the hearts in place as well as the butterflies

Finally, called it done! Tell you what, that sentiment I used is somewhat ironic. If I knew I could NOT fail - I'd probably be churning out these by the dozen! But I seemed to hit so many issues along the way, many of which I've not even written about here. I had enormous encouragement via email from Sarn along the way although my guess is that it's the freedom to just throw what you like at things and see what happens that attracts many crafters to multi media. I take my hat off to them as it's most probably how true artists work - I now know that I'm a clean and 'non-messy' crafter, possibly more of an engineer, first and foremost.

The funny thing is, my in-house critic likes it a lot. Then he asked 'so what are you going to do with it, where will it go?'. At that point I just shrugged and rolled my eyes ......... I have absolutely no idea!