I wanted to try out the double Z fold card that Meena made, and she also gave us a really clear little tutorial on how to go about making it. Lynn had also made a super card which was also a weekly pick in the Playground: 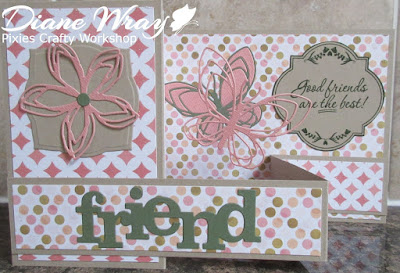 And a slightly sideways view so you can see the two butterflies more clearly: 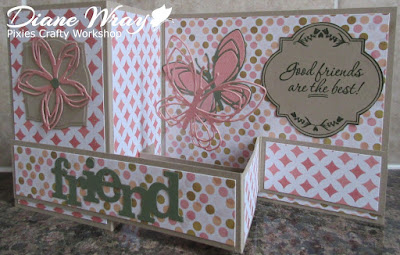 Or perhaps not as clearly as I'd hoped :)

- patterned card from the Deco Time 'Cardboard patterns' pad (a gift from Jules, thank you again!) to cover all the card base and narrow band panels - the designs have encapsulated sparkle in them and are really lovely

- a snippet of green card from the snippets folder, die cut using the Winnie and Walter 'Friend' cutaway die, which was glued in place

- that was topped with a flower, die cut using peach card and the flower die from the Concord & 9th 'Floral and Flutter' set - glued in place. The green centre of the flower is another dot, cut using the 'Friend' die

- the sentiment was stamped using the Inky Doodles 'In my Heart' stamp set for the frame and the words are from the Hero Arts 'Good Friends' sentiments set. I then trimmed round the frame and glued it in place

- that only left the butterflies to do, so I die cut one peach and one green butterfly using the butterfly die from the Concord and 9th 'Floral and Flutter' die set - having first covered the back of the snippets of card with Stick-It double sided adhesive

- cut a half inch wide strip of clear acetate, rounded one end and using very narrow red line tape stuck the butterfly onto the strip

- the most fiddly part of the card was sticking that strip in place, I used red line tape and crossed eyes!

- just had to then stick the acetate strip with the butterfly on the end in place, onto the strip of card I'd just added inside the Z fold of the card

It's important to make sure you stick the free flying butterfly so that the card will actually close - ask me how I know! Luckily I didn't wreck the card when I removed the acetate strip and angled it the other way :)

Another little tip, when you're sticking two identical layers together using sticky adhesive backing like I did with the peach free flying butterfly, is to just pull a little bit of the backing away at a time as you line the two layers up.

I really loved making this card - thanks again Meena for the inspiration! And also a big thank you to Bonnie, this is where I first saw the butterfly die being used and of course had to track it down in the UK!