Okey dokey, after the 'big mess' with mixed media here I decided to revisit a technique for the current CAS Mix Up Challenge, which is marbling plus two other techniques of your own choosing. I figured that after the MM fiasco - 'shaving foam marbling' would be a total breeze. Ha! Not so!

Somewhere along the way I managed to press a Dylusions spray bottle with the nozzle pointing right at the lap top! Such a fetching shade of turquoise immediately covered the silver flat part, thankfully in front of the keys though. What a scramble for baby wipes! Luckily it all cleaned up fine but did absolutely nothing for my confidence at playing with anything other than straightforward paper!

I was so jittery by this point that, despite making quite a few marbled pieces of card, I handled them badly and a lot of them ended up in the bin. But I did manage to make this card: 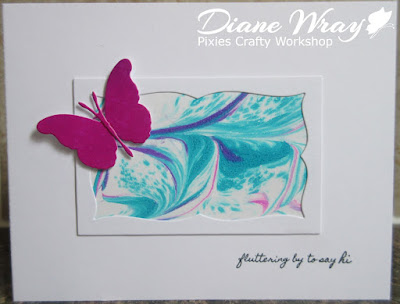 - 'the marbling' itself (shudder) for which I used the lid of an A4 plastic box from Hobbycraft. It's deep enough and also big enough to be able to have a good play - and between times it belongs on top of the box holding Playground Toy Box overspill :) The challenge itself has so many wonderful examples plus loads of links to 'marbling' tutorials as well - not just using shaving foam. I used really cheap Sainsbury's shaving foam from their basics range left over from my previous foray into marbling and spread a layer of the foam all over the inside of the box lid before levelling it with a craft spatula. Then I added drops of Dylusions inks all over, using 'Funky Fuchsia', 'Crushed Grape' and 'Vibrant Turquoise' before swirling them using the wrong end of a paintbrush

- then scraped the foam off the card using a ruler and set the now patterned pieces aside to dry. A lot of my pieces had too much white showing - I'd been too scared of 'over mixing' and ended up with a bit of the opposite really

- however, I selected one piece I did like and framed it using a white card frame die cut using Impressions Obsession's 'Rectangle 6 in 1 frames' die and glued it to the centre of the card blank

- the butterfly was die cut from a snippet of matt card which I'd already sprayed with Dylusions 'Funky Fuchsia' and allowed to thoroughly dry - I used the Memory Box 'Isabella' butterfly die as I figured it needed a solid butterfly rather than a lacy one, to keep the CAS look

- then it was just a case of popping the butterfly in place, using a couple of small pieces of thin sticky pad

My additional techniques to the marbling are die cutting and stamping BTW.

I'd used Distress Ink refills when I tried this previously, which came out very pale and soft so was quite astounded at how vivid the Dylusions inks are. Love them though!

I quite like the impression of movement in the marbled piece - but it's nothing compared to the rapid scramble here when I had the 'leetle accident' and sprayed the laptop turquoise. I really shouldn't be let loose to play!