Hi there! What a fabulous selection of entries we had, once again, in the Playground. It truly is so good to see so many of you playing along and finding such clever ways to use up your snippets!

My own snippets card for today came about when I was pondering over which prizes to offer, as is often the way when I make my Sunday Snippets card. Bet you never guessed that one :)

Anyhooooo, whilst thinking, I decided to tidy up a bit and pop some scraps of card into the snippets folder and there was this piece of card stock glaring at me (yet again) from the 'miscellaneous' slot. It was way too pretty to throw away but somehow it had had managed to get an unsightly crumple in it. It's a piece of 'rainbow' card and the pattern runs diagonally - bingo! I worked out that I could chop the card down to a usable size, lose the crumple and have the colour graduations running straight across the card - a bit like a sunrise. How I wish I could produce this background so perfectly using inks!

I did first spot this gorgeous die over at Chris's Ramblings and Chris also used the die beautifully with white as well as black - and also her inky backgrounds were much more inventive than mine. Apart from all that, my card is a pretty unashamed CASE really - thank you Chris for the inspiration!

This was the end result - really quite easy to do once all the measuring was sorted out: 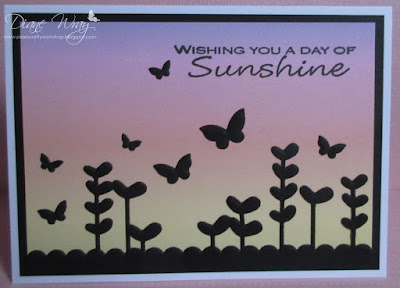 - the rainbow card snippet, trimmed to size after measuring the width of the die I wanted to use

- at this point I felt brave enough to stick the border to the rainbow card before actually stamping the sentiment. Good grief, this could have been a major disaster - but it worked and I stamped the lovely sentiment using Memento 'Tuxedo Black' ink, my Fiskars stamp press and an Inkylicious stamp from the two-stamp set called 'Sunshine Wishes'

- next assembled the card, black layer and then rainbow layer with the butterfly garden silhouetted on it and the sentiment already stamped of course

- the die comes with seven 'free flying' butterflies - and as seven is my lucky number I used them all and popped them onto the card front fluttering hither and thither :)

Here's a couple of little tips. I hate stamping straight onto card stock but for this card (and many others before if truth be known as I learned the hard way to be cautious) I used a piece of the offcuts of the rainbow card to check how clearly the stamp worked on it rather than wreck the thing. As you can see, it worked fine - but the next thing was how to make sure the card stock didn't slip about when I was actually stamping using the Fiskars press. Often a stamp positioner will hold your piece of card steady - but if that's not going to be the case then the solution is easy peasy - especially if you use a slippery glass cutting mat for your work area. Just apply a couple of stripes of removable tape runner to the back of the piece of card to hold it onto the work surface. After stamping the sentiment - or even an image of course, - just rub your finger over the back of the card stock to ball up the removable tape runner lines.

OK, that was my snippets card for today - let's now take a peek at a few picks from last week. Oh, I like that phrase 'peek at the picks'. This week I've tried to really focus on some ideas and techniques that you may want to try out: 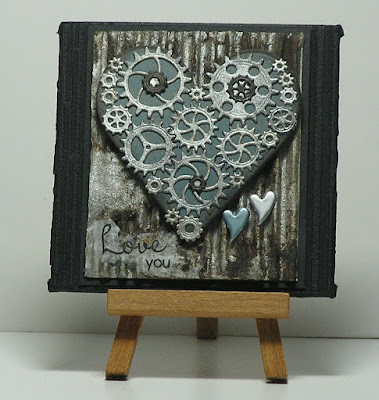 This terrific card was made by Cathy R, and you need to nip over to her blog to see how she used 'rusting powder' to create the wonderful background panel. Clever stuff! 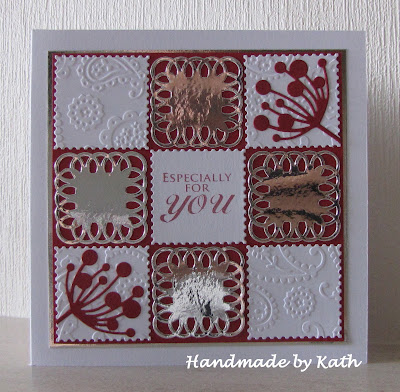 I love any form of paper patchwork to use up snippets, and this lovely card made by Kath really caught my eye! 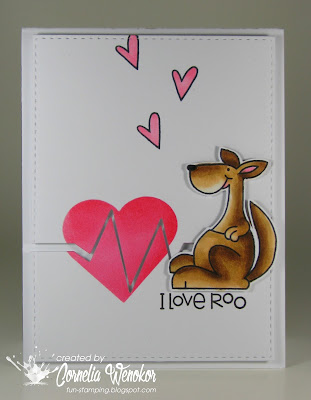 How cute is this card then? Made by Cornelia and what really caught my eye is the clever way the card top has been split across the heart. A perfect Valentine's Day card. 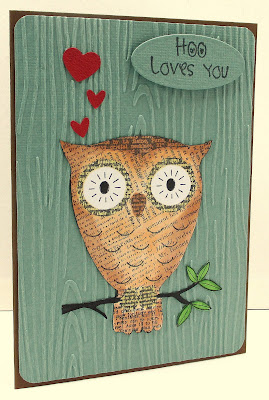 We had some really great Valentine's Day cards in the Playground this past week, here's one idea that I love - made by Jenny H. The owl stamp is so funky and that sentiment, which you could produce on your computer, is perfect! A card with a difference - I might make something similar for the in-house critic :) 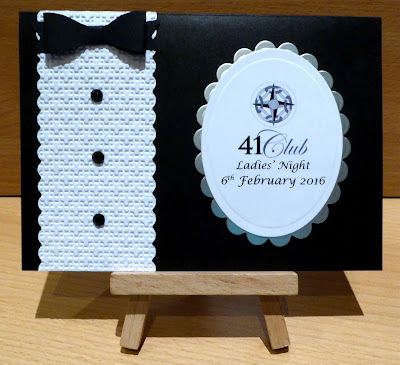 This is such a clever idea too! Liz made it, although it's a different card shown on the thumbnail in Mr Linky - so in case you missed seeing this I thought I'd add it in as well! And, Liz has a link on her blog to a video tutorial if you want to have a go for yourself.

I need to stop there with the picks folks - a basket of ironing is calling me plus I've sat still for long enough.

This week we have three new Playmates joining in the fun: 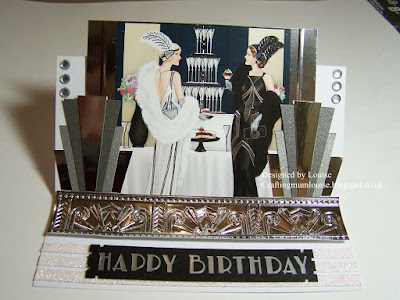 Louise H came to play twice, and after some deliberation I've picked her second card to show you here. I love Art Deco - so elegant. 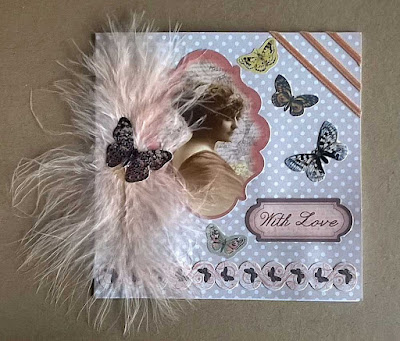 Pen came to play three times (must be the lure of the 'hooch' in the tree house) - and I've chosen to show you her third entry - I adore the soft and feathery look! 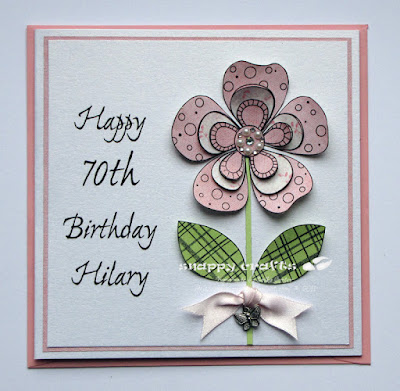 Erika skipped in to share this really pretty card - paper piecing is one the very best ways to use up snippets isn't it? Lovely card!

Thank you so much for coming to play and we hope to see you all again really soon!

Before we move on, our Barb is celebrating a year since she began her blog, with some really lovely candy. You have until 28th February to add your name into Mr Linky over at Barb's Faraway Cards - and this is the generous and varied prize you can win, if you haven't entered yet what are you waiting for? 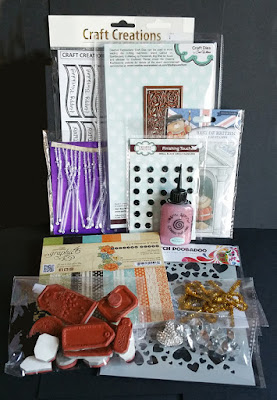 Time for the prize draw here now. We had the heart die, the glitter papers and the hearts embossing folder on offer - and our winner is:

Carole (Dixon)
Oh yippee, it's a first win for Carole according to my records - and she also whipped into the Playground as one of the last entries, which shows it's never too late to play along! Could you please drop me an email Carole (address is on the RH sidebar) letting me have your snail mail address and I'll post off your prize as soon as possible this coming week.

And the Playground prize this coming week is: 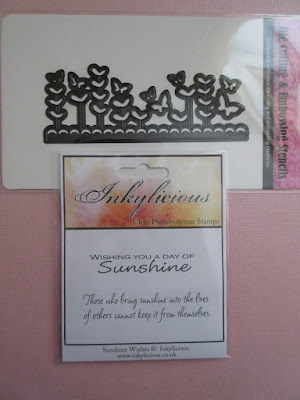 Linked to today's snippets card (as is almost always the case) - it's your own Crafts-Too 'Butterfly Garden' die and Inkylicious  two-stamp set called 'Sunshine Wishes'. I do so like the second sentiment 'Those who bring sunshine into the lives of others cannot keep it from themselves'.

The Snippets Challenge will run for one week and the Playground gates will close at 11am UK time on Saturday 13th February. The gates will open again at midnight UK time on the same day.

Maximum of three entries and please say in a comment if you wish to play and be a possible winner of the prize. If you only want to play for either the die set or the sentiment stamps then just say so in a comment - if your number comes up then I'll do a further draw for the remaining part of the prize. But, both items are up as one complete prize if you so wish of course. Please also link back to the Playground in your blog post to be eligible for the draw.

Enjoy your week - whatever you have planned! Valentine's Day isn't far away so I guess we'll have a few entries featuring even more love and mushy stuff this week :)

Di and, of course, Parsnip! (Who says quite adamantly , one kiss blown in his direction and he'll run for cover!)
x