I needed to make a card for a little neighbour, who is four years old this week, this was the result: 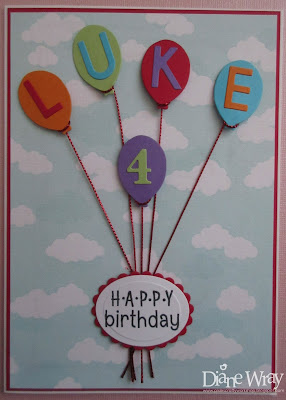 - piece of SU 'Real Red' card stock as a 'frame' to the patterned paper, glued to the card blank

- cloud patterned paper is LOTV from their 'Up, Up and Away' paper pad, trimmed to just a little smaller than the red layer and glued in place

- a selection of  plain snippets of card, die cut with a balloon die from the Tim Holtz 'Crazy Things' die set

- glued the letters and numbers onto the balloons

- added small loops of red metallic cord round the tied part of the balloon and then stuck lengths of the same cord to hand from behind each balloon. It's much easier to do this as a two part process rather than wrestle with the cord all in one piece around the tied part and then hanging down

- before adding the balloons to the card I stamped the sentiment onto a white card snippet, using Memento 'Tuxedo Black' ink and a stamp from the Hero Arts 'Messages' set

- to be on the safe side I had cut the cord lengths long enough to be able to trim them down once in place - job done!

I thought this card would be really quick to make - fiddle faddling around with the cord and adding it to the balloons took longer than expected though, sigh.