Ever since I bought the Woodware 'Jigsaw Piece' punch I've had my eye on a few jigsaw dies. Last week I had the time, inclination and well-being (yippee!) to spend time in a branch of 'The Range', which opened at the end of last year, not too many miles from us. Ha, I just checked exactly what date they opened and 'shoo nuff' it was mid-November when I was just a tad laid up :)

I spent quite a while wandering round their craft section needless to say and my eye fell upon this die by DoCrafts called 'Jigsaw Pieces'. BTW, I don't keep the packaging when I buy dies, they're all stored in A4 ring binders on magnetic sheets within strong (side opening) plastic file pouches - and are recorded on white card sheets in the front of each binder: 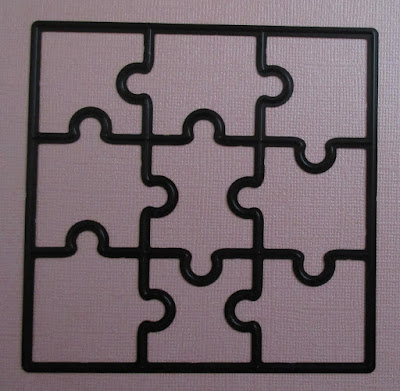 Anyhow, I replaced my eye from where it had fallen on the die (as you do) and quickly grabbed it as it was all on its lonesome and needed a good home.

I can see loads of uses for this die, I was itching to use it so my card isn't overly exciting - but one thing I subsequently thought could be fun for kiddies would be to use a main image on the front of their card and then included a repeat image inside the card, die cut into the nine piece jigsaw, perhaps with the pieces popped into a little cellophane bag, for them to assemble following the front of the card as a guide? 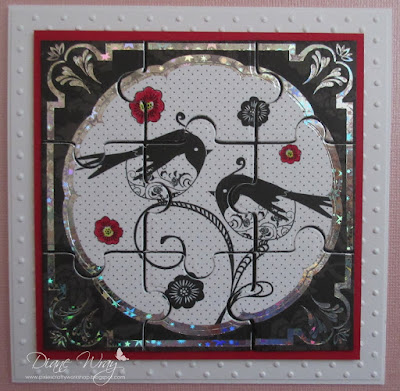 - piece of white card stock which I embossed using Cuttlebug's 'Swiss Dots' folder. The folder isn't quite as wide as I wanted so it was a case of moving it across, running through again and then using a ball ended tool to 're-emboss' where some of the dots had been flattened, groan. Then trimmed it to size and glued onto the card itself

- in my box of Kanban goodies I found a square birdie image with a frame just a teensy weensy bit smaller than the outer edges of the die. Without separating image and frame, backed them with double sided adhesive sheet (the medium strength stuff) and coloured three of the flowers using Whispers markers

- time to play with the new die (DoCrafts 'Jigsaw Pieces, which is approx. 4" square) - just taped in place on the adhesive sheet backed image with low tack tape and run through the Cuttlebug

- had a snippet of black card handy as I wanted that to show up the jigsaw cuts a bit and assembled the pieces which were backed with sticky adhesive from my earlier trickery - one at a time onto it, leaving just a little gap between each one

Whilst typing this I thought of another way you could include a little jigsaw in a kiddie's card, just cut each piece in a different colour for the card front and also for your little puzzle to include in the card. Good for kids colour recognition and a great way to use up snippets too :)

It's been a windy old day here today/yesterday (Monday) - I'm sure I spotted a neighbour chasing his shed roof down the road and the whole house here has been whistling, creaking and groaning - despite all the insulation, well sealed windows and such. I absolutely hate wind, and I don't mean that sort - the gales and gusts are so unforgiving!

So, it's up to Sarn as to whether the newly formed tradition of the Playground Pancake Day Race goes ahead or not. I hope it does - Parsnip is poised with his huge plate, and a spoon and fork, at the ready :) I'm standing by with the First Aid kit and a fire extinguisher!