It's a lovely theme to the current challenge over at Merry Monday this week - 'Santa'.

So my card for today covers all three challenges - plus I used one of the Bugaboo digital images I recently won over at Hazel's too: 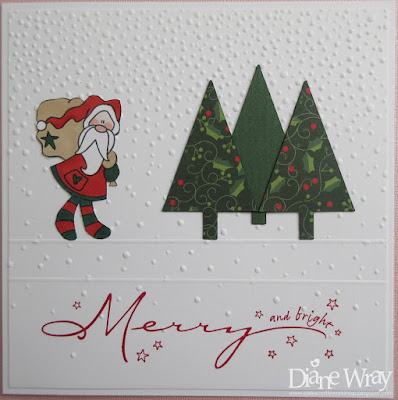 - as said, the cute 'Stocking Santa sack' digi image was part of my prize chosen from Bugaboo. I just re sized him and printed onto white card before colouring with Pro markers. Then fussy cut round the image and ran the edge of a black Whispers marker right round the image to redefine any areas where I  felt I'd cut slightly into the black outline (OCD strikes again!). I then made Santa sit around and twiddle his thumbs whilst I prepared the trees

- all that was left was to position Santa and the three trees along the top embossed line, to 'ground' them, and then glue in place

I did add a tickle of clear Wink of Stella to the bobble and fur trim on Santa's hat - which you can't see in the photos. Not surprising really 'cos it's very hard to get it to show up in photos. Snort, especially if you only decide the add the tickles after taking, editing and uploading the photo anyhow :)