It's the 5th Birthday of one of my favourite challenges - Less is More. The theme is 'White on White' and 'accents in metallic or B/W are perfectly acceptable'. I think my black is somewhat more than just an accent (probably I'd go so far as to use the word overpowering!), sigh, but am still linking in to wish all the hardworking girls on the DT a Very Happy Birthday .... and many more to come! 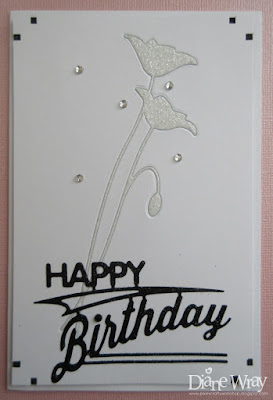 I was trying to achieve a bit of an Art Deco look - 'nul points' as zee French would say when judging zee UK in zee Eurovision Song Contest :)

- piece of white card from the same A4 sheet of card, trimmed slightly smaller than the card front and then die cut an aperture at an angle using the Memory Box 'Prim Poppy' die. I kept the die cuts themselves, needed the cut piece from the centre later on and also the poppies will be used at some point

- die cut the 'Prim Poppies' again, this time from a piece of white adhesive glitter sheet from the Xcut 'Metallics' set which I'd backed with a snippet of white card before die cutting - that was to make sure the level was right between the background and the poppies - didn't want them to be recessed and they only stand very slightly proud of the backing card

- wow, what a lot of black against the white in one area - so I punched each corner using a Woodware 'Fancy Corner' punch and added little 1" squares of black card, covered with leftover snippets of the black adhesive glitter sheet behind each one

- final touches, a few clear diamante gems around the poppies and one black gem above the letter 'i' in the sentiment

If it wasn't LIM's Birthday I wouldn't bother linking this into their challenge as frankly I don't think it's a success - but I do so want to help them to celebrate!

Lately I've been referring to medium strength adhesive sheet. Just to clarify - my definitions of adhesive sheet start with the strong stuff which is made by the likes of Woodware and comes with a red plastic backing, just like the ultra sticky red line tape. I tend to use that stuff quite sparingly as it isn't cheap - and it also is no good for die cutting IMHO.

Then, the medium stuff is covered with waxed paper backing, it die cuts quite well so long as the die isn't too finely detailed and is pretty robust. If I was using micro beads I'd go for the stronger stuff mentioned above but this will generally hold fine glitter and also gilding flakes without any problems.

And lastly, the lightweight adhesive sheet is 'Stick-It'. The layer of adhesive on Stick-It is very thin and it's really great for those intricate dies so long as you remember that it is deliberately still movable until you've really pressed it in place firmly. If I was layering several thicknesses of card or paper to do the 'camouflage' technique then I certainly wouldn't expect Stick-It to hold several layers onto my project. I would layer up using Stick-It as it's just so good with die cuts - but, the layer right on the card would be held in place with stronger adhesive sheet or even glue.

Hope this made some sense! I found all this out by trial and a good few errors so just wanted to share my thoughts :)