Cuttlebug Mania Challenge - I {Heart} You}

Time for the new challenge over at Cuttlebug Mania, and the theme is 'I {Heart} You - have a heart on your creation'.

You do have to use a manual die cutting/embossing machine (it doesn't need to be a Cuttlebug but it must be manual, not electronic). And, you can't mix the two, it must be all manual please. Then make your entry, link into the challenge, link to the challenge in your own blog post and and make sure that you also say what products you used for any die cutting/embossing.

Details of our sponsor this fortnight are over on the challenge - with a nice prize to be won.

It's  certainly a great theme and hopefully your 'love, hearts and mushy stuff' goodies are all still to hand. This is my DT card: 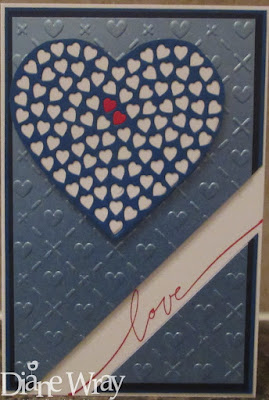 - snippets of darker blue card to form a double 'frame'

- a snippet of baby blue pearlescent card, embossed using the Xcut 'Hearts and Kisses' embossing folder, trimmed to size and then layered up with the two darker pieces of card mentioned above. LOVE this folder!

- after a lot of juggling around I measured and then cut a diagonal strip out of the layered card, placed it on the card front and lightly penciled along the diagonally cut lines as a guide to the stamping - then set the pieces to one side

- phew, perfect fit when I stamped the 'Love' sentiment using SU's 'Real Red ink. The sentiment is a pre-loved one made by SU, from a set of four called 'Wonderful Words', probably long discontinued

- making the big heart was fun - not! The first attempt was a total failure and I had to think outside the box when I redid it. First of all I die cut a plain white heart from a snippet using the Memory Box 'Cupid Heart' die and put that to one side - so far so good

- covered a snippet of blue card with Stick-It adhesive sheet and then die cut the heart shaped cluster of hearts using the Memory Box die called 'Heart of Hearts' for the second time. It comes without a frame and that's where I had problems with the first attempt - it's almost impossible to line up the 'Cupid Heart' evenly in order to die cut a nice narrow border around the little die cuts. That's made me realise that the die is not actually meant to be used as a frame - unless you truly want a trip to the Funny Farm! Cluck, baa, moo!

- then came a light bulb moment! I took the solid die (which has a thin perspex inside the outer metal shape so you can see exactly where it's positioned), gently taped it in place over the little hearts and lightly pencilled round the outside before then hand cutting it to form a border - yay!

- from a little snippet of red card I die cut a handful of little hearts, again using the 'Heart of Hearts' die, and then added just a couple into the main heart shape before sticking it onto the card using thin sticky pads

By then I was exhausted and the place was littered with tiny little sticky backed hearts! A few lessons learned there! Luckily I'd already invested in the die a good while ago to use with another MB heart die (Serafina) so at least it's fine with that, plus it's good as a backing for the card I made today and also the butterflies heart shapes - just don't expect borders without needing a session on a couch under a bright light!

Why not join in with the challenge? Surely it can't be any harder than the angst I had with my card - the theme is fine, it was what I tried to do with it! We'd love to see you over at Cuttlebug Mania!