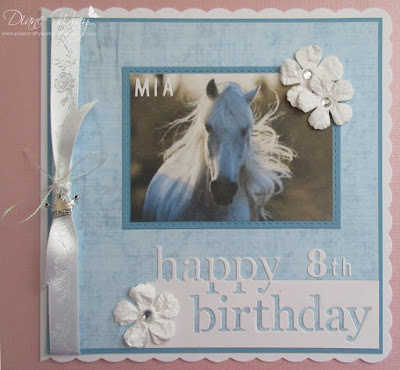 This card works wonderfully for your grand daughter Di, especially with her love of horses. The topper looks great with the stitched frame and all the embellishments and personal touches with the MB sentiment and added number and her name on the topper. I adore that pretty ribbon with the charm and the flowers with the gems in the middle, and the lightly patterned paper complements it all perfectly. x

That's a beautiful horse, done with beautiful blues and a wonderful birthday card for a special little girl named Mia! I'm sure she loved it!!

Di... This is just beautiful :)
I can see that this is a card made with a lot of love.
Hope Mia has a 'happy' happy birthday... I'm sure she'll adore this card :)

What a perfect card for your Mia.....the blue works so well with that gorgeous horse focal. Enjoy your weekend xx

Have a nice weekend!
Hugs, Liv

This is so, so beautiful, and obviously perfect for the intended recipient :-) I'm sure she was over the moon with it! x

I was horse-mad as a child and would've LOVED and ADORED this card . . . so I'm sure Mia will have loved it too.

A fabulous card and I'm sure Mia loved it too!
Kath x

I'm in love with this card!!! Surely your grand-doughter will love it, too!!! The sweet horse matches perfectly with the cardstock and the embellishments, there are the same colours and the sentiment is a gorgous touch! The little flowers are so girly! Great work!

This is a lovely design Diane, she's sure to love it.
Hugs Jacee
Simply Paper Card Design

This is gorgeous, Di! I love it and I'm sure Mia does too!
Hugs,
Em

What a beautiful card for your Grand Daughter. The focal image is lovely and the blues in the backing layers compliment it perfectly. Gorgeous ribbon and embellishments too.
Jean x

A stunning card for Mia - you sure you are old enough to have an 8 year old grand daughter?! I am sure she loved it very much! I discovered on our trip to see Meg that she had taken her 18th birthday card with her to uni

I can just picture Mia as an adult, opening her box of special cards from you every year and looking back at all the beautiful creations you have made. This one will be a true favorite, no doubt about it! It's precious and so perfect for her!! Hugs, Darnell

Oh my--this is amazing & gorgeous, Di! I bet she treasures it!

Such a pretty card x Amanda

I'm not a horse lover ( their teeth always look too big!) but this one does look attractive and it has made a beautiful card

Di, this is absolutely over the top sensational! WOW! I love it!!! Know she will too.
Lynn

What a lovely card. I am sure Mia loved it. Kate x

Beautiful card, Di, especially for someone who loves horses. I'm sure Mia was thrilled with it. xx