The latest challenge over at Craftyhazelnut's Christmas Challenge is 'If you want to get ahead, get a hat'. It's the 200th week that Hazel has been running the challenge - wahoo!!

At first I intended using a NBUS stamp but then I turned to the box of last year's received shop-bought cards and found one which was perfect to upcycle.

I'd spotted that Elizabeth had made some lovely rocker cards recently, so after an online search I'd already bought some bigger circular dies (the largest one is 14cm/5.5" diameter), then yesterday just sat and worked out how to make a card. It really is easy-peasy lemon-squeezy but such a fun result :) 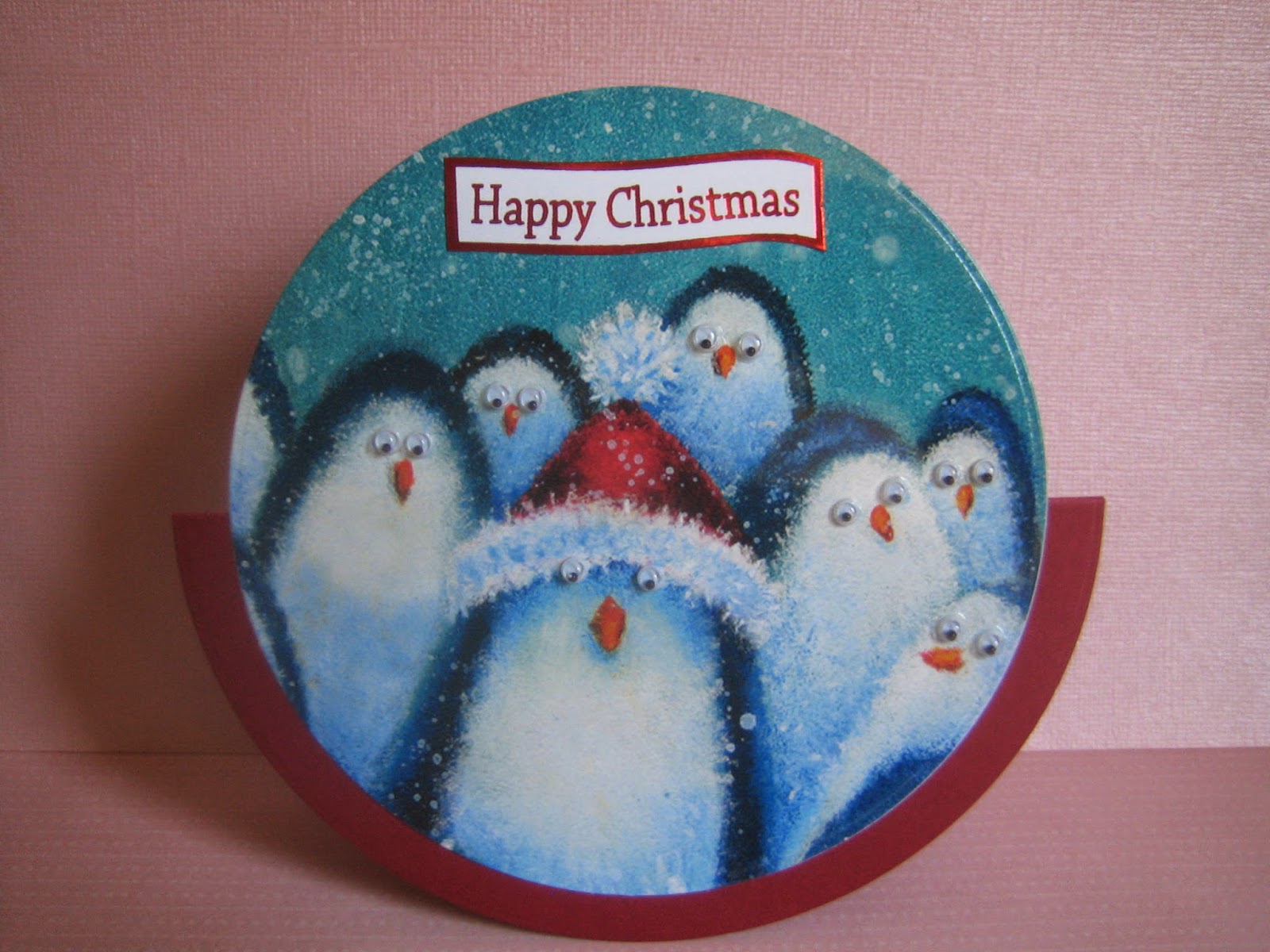 - SU 'Cherry Cobbler' card stock, die cut into a circle using the largest (14cm) die from the Tonic Studios 'Circle Layering Die Set'. Then scored right across the centre at 7cm, using the Hougie Board

- spread a thin layer of Collall glue onto the bottom half of the back of the image and, using the line I'd drawn used that as a guide to stick the image onto the rocker section

- then added teeny little googly eyes to each penguin, which wobble to and fro as the card rocks, snigger

- final touch, a Kanban sentiment banner at the top of the card

The in-house critic was muchly impressed, and of course immediately suggested Christmas rocker cards for the little girlies in Germany. I was already ahead of him there as it was why Elizabeth had been playing making these initially!

And my opinion of the Tonic dies? Brilliant! There are 14 dies in the set, they go up in pretty small steps from 2.3cm to 14cm. They come on their own magnetic sheet in a nice little plastic packet which has fitted into one of my die folders perfectly. And, as I have no immediate intention of changing my beloved Cuttlebug, they are well within the cutting plate size. They cut beautifully too, I bought mine from Amazon UK here.

I've only made this one card so far, but am wondering if it would pay to be really careful if you add extras such as gems, die cuts etc. - just in case it ends up too weighted at one side or another so wouldn't sit properly. Mine does but then what I did add is pretty much balanced out.

Edit: And too funny - when I'd written this post I hopped back to Elizabeth's blog to link to her cards and found a lot of what I've written here about which dies to use, balance issues etc. Shame that I didn't think to check first and save a load of time; but a few blog posts slipped past when we were getting ready for the bathroom workers :(

And of course, this card is also for Craftyhazelnut's Christmas Challenge Extra, where it's always anything goes'