And amidst all the racket

....and also 'cos apart from making teas and coffees there wasn't much else to do, I sat in my craft room with time to play :) The first challenge I wanted to enter is Craftyhazelnut's Christmas Challenge, where this week's theme is 'Something beginning with P'. I rootled through last year's Christmas cards, kept to upcycle, and found loads of ones with penguins on. I know, pretty obvious choice really: 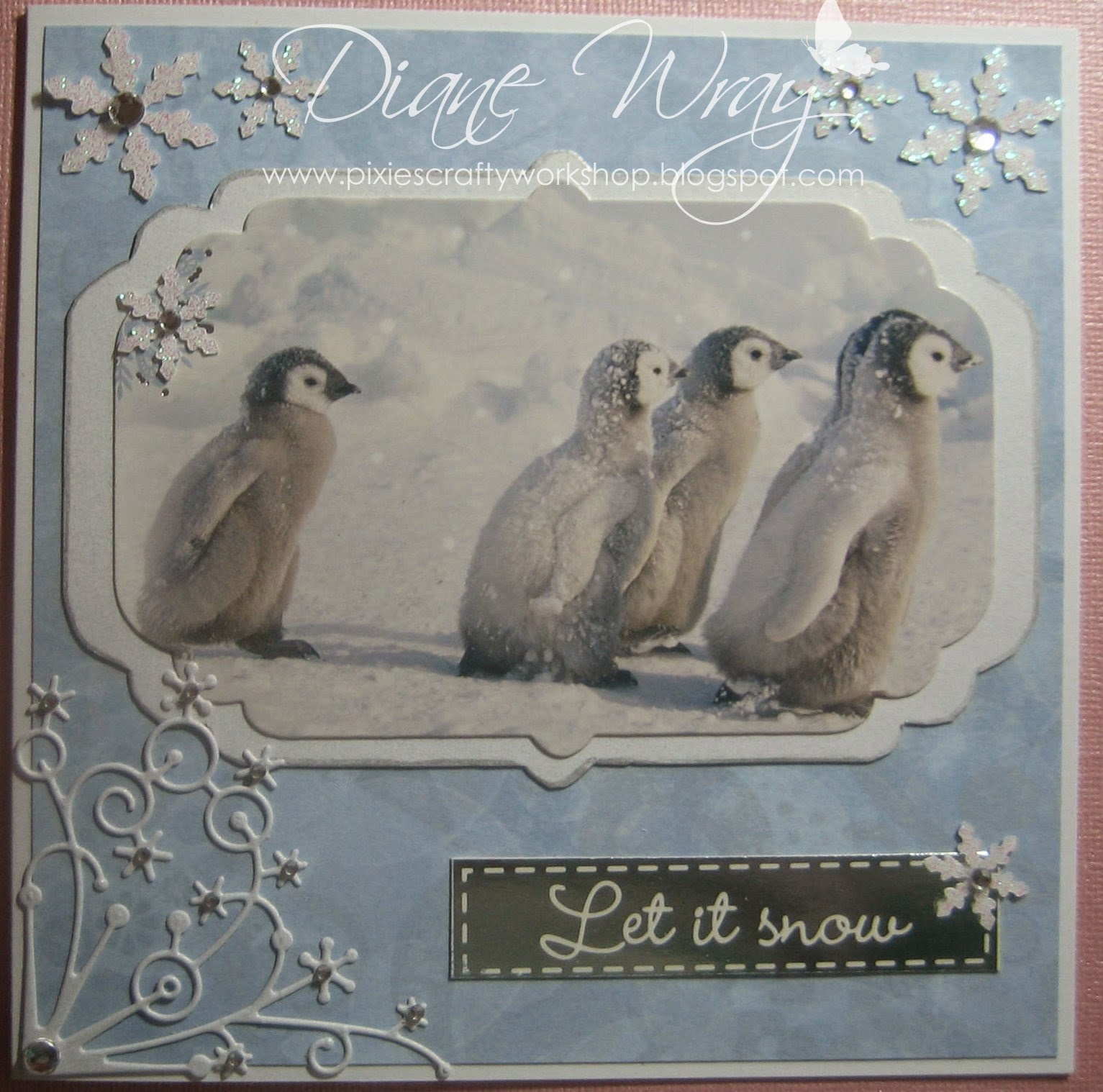 - penguin image was die cut using what I think is a Sizzix die (one of the first I ever bought) and then mounted onto a white Centura pearlescent card backing, which had been hand cut after tracing round the outside of the die. A quick whizz round the edge using a silver Calligraphy pen

- the sentiment also came from the original card

- final touch, different sizes of clear sparkly gems were added to the snowflakes and the corner

And, today I have two 'hints and tips' for you:

1.  First of all, the 'new secret weapon'. I bet most of us have some intricate dies which drive us crazy when trying to neatly glue them onto projects? I've tried all sorts of tricks including using glue pens, very fine nozzle glues (such as Cosmic or Glossy Accents) - and my Xyron machine. Now, much as I really love the Xyron, those of you who have one will know that with an intricate die you will have a layer of sticky 'gloop' within the gaps. I can usually remove this using SU's adhesive remover 'eraser' - but, with a very detailed die such as I used today it's a loooong process and so I would normally resort to a glue pen or similar.

But, last week I stumbled across a new product online, on Kath's blog (All That Glitters) - ordered some and used it for the first time on the corner die cut. And I'm 100% converted!

It's very similar to normal double sided adhesive sheet, but with the added advantage that it's got very thin protective sheet on either side of a 'micros thin' layer of glue - very much like the Xyron glue film in fact. But, the beauty is that you just cover the wrong side of the piece of card you intend to die cut with a piece of the adhesive sheet, then die cut it of course in the usual way - and there are no gloopy bits! I think it's best to have your project sitting there ready for the die cut as when I removed the die cut from the die the second layer of protecting paper came away really easily ( no poking about looking for an edge to start off the peeling).

The sheets come in packs of five, called Stick It Die-Cut Adhesive sheets, in two sizes from Craft Obsessions. More or less A4 and A5 sizes.

If you can hang on, there will be a couple of packs of the large size coming up in the Playground shortly :) Oh, and I have no connection at all with the product - just wanted to share a brilliant new invention which has been endorsed by Ken Oliver. I bet Spellbinders wish they'd thought of it first!

Edit!! I just spotted that Kath over at All That Glitters is giving away some of these sheets, all you have to do to be in with a chance is add your name to the linky thingy bob over HERE. And, like me, Kath will post internationally.

2. My second tip is also to do with sticky stuff, a tip I also found it on the internet but can't remember just where, otherwise I'd give credit. The individual snowflakes used today were stuck on using Glossy Accents. Until recently I really struggled and almost always had to clear the nozzle with a hat pin before starting a fresh session with the stuff. Not so now though!

The routine is, when you've finished using Glossy Accents just follow these steps:

a. Squeeze the bottle until the glues rises right to the top of the nozzle.

b. Wipe the nozzle and top with a baby wipe, at the same time releasing the pressure so the glue sinks back down.

c. Give the bottle a couple of taps on your worksurface to make sure it's properly settled.

d. Replace the cap as usual ready for your next, hopefully trouble free, use.

Of course my card is also for Craftyhazelnut's Christmas Challenge Extra, where it's always 'Anything Goes'.