Gosh, it's ages since I posted a recipe here, but this is really worth sharing.

One of the very first things I learned to cook in Domestic Science classes at school was Scotch Eggs, and even before that I remember my Mum making them for picnic outings. But, the days of deep fat fryers, in fact almost any frying, are long gone in this here house - so I was delighted to find a way to make yummy oven baked Scotch Eggs: 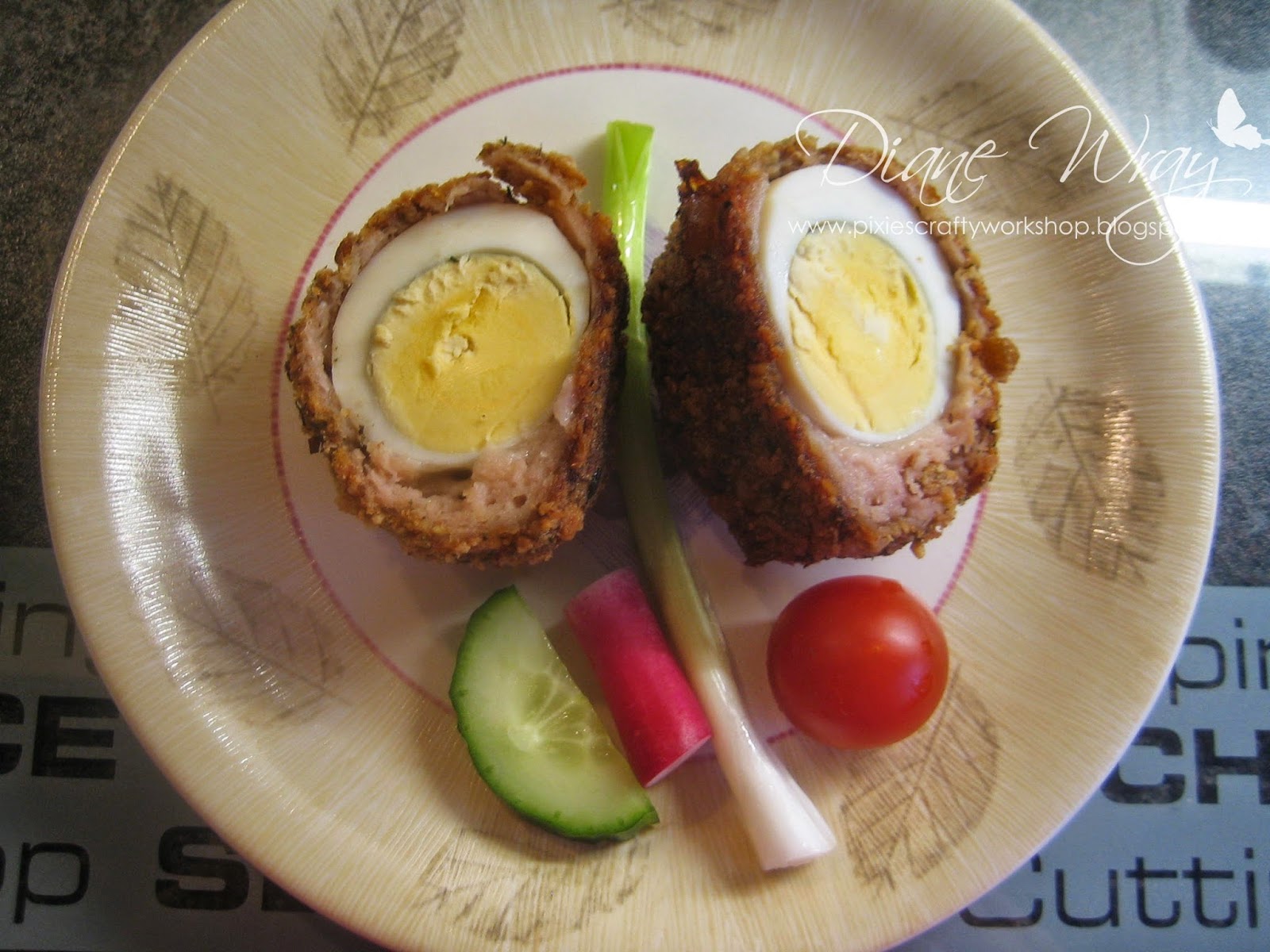 Ooops, when I took the photo I just popped some bits of salad I was in the middle of preparing on the plate to pretty it up a bit - looks like a rather alien face to me!

4 large eggs
6-8 thick sausages - one and a half (or two) per Scotch Egg
1 beaten egg
130g packet lemon, thyme and parsley dry stuffing mix (Sainsbury's own)
a little flour

NB. I find it best to have everything lined up in bowls/on plates before actually assembling the eggs, you're gonna have messy hands.

Skin the sausages and roll into four individual balls (one and half or two sausages equals one ball). At this stage it's best to have a plate handy with some plain flour on it - 1-2 tablespoons is enough.

Take each sausagemeat ball and flatten into a pattie, sit a shelled hard boiled egg in the centre (gently roll the egg in flour first) and fold the sausage meat right round it making sure it's fully sealed.

Do the same with the other three eggs.

Dust your hands with some of the flour and lightly roll the eggs in the flour on the plate, dusting off the excess.

One at a time take the assembled eggs and coat in beaten egg and then the stuffing mix.

Pop the coated eggs onto a non-stick baking tray and cook for 40-50 minutes at 180C. Now this is the bit where it depends on your oven, mine is quite fierce so I reduced the temperature to 160C after 30 minutes.

Test the sausage meat is thoroughly cooked before removing the eggs from oven.

Can be eaten hot, warm or cold. Delicious with new potatoes and salad.

Things I do: I use Richmond Thick Irish sausages, mostly as the meat is so smooth.

The first time I made these I used half sage and onion stuffing mix and half dried breadcrumbs mixed together - that was very nice but the lemon, thyme and parsley is even better :)

I do cover my non-stick baking trays for some recipes, and this is one of those. Partly because there will be some fat from the sausages and it's a bit easier to clean up. Mostly however, it's because no matter how flat you smooth the foil the eggs don't roll around as they would on a totally flat tray. But, to keep them from rolling round you could always stick a couple of cocktail sticks in as little 'props' :)

I found this recipe on someone's blog a while ago and it just stuck in my mind. Am sure it's not a blog I usually visit but if it WAS you do please say and I'll give you the credit :)