I'd only been working at the charity shop for one Saturday afternoon or so but was beginning to get the hang of the dreaded steaming machine. My eyes were also being opened about the total rubbish that sadly we were 'given' - don't get me wrong, we had some fantastic donations and were so grateful when people thought of the shop. But for example cracked and chipped crockery, three-legged chairs (I kid you not!), half-used lipsticks and trainers where one big toe area had been totally cut away (presumably to accommodate a broken or damaged toe - ouch) weren't exactly going to be at the top of anyone's shopping list were they?

So, outside the back of the shop, we had a mahoosive skip and anything that we couldn't clean, fix or recycle had to be ditched. 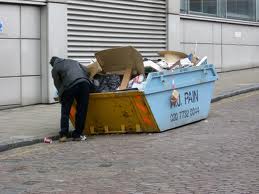 The skip was about twice the size of the one above, and located in our own back yard area. I couldn't see to peep over the top of the thing - anyhow, I was too busy indoors wrestling with 'Hissing Sid The Steamer'.

But, one of our 'ladies' trotted out with a load of stuff and threw it into the skip - an action which was followed by a loud yell of indignation. When she looked closer there was only a guy, inside the skip, who had the cheek to shout 'Watch it, I'm busy in here!!'. As fast as she'd been loading the skip he'd been ferreting out stuff and passing it to his mate who was calmly loading up a supermarket trolley 'borrowed' from Asda just nearby.

His mate 'legged it' and he scrambled up out of the skip, before being chased down the street by an irate band of volunteers waving an assortment of brooms and shouting at him and his 'mate' to hop it.

That was the tip of the iceberg - much worse tricks were employed by the local lowlife, to be saved for another day I think - but, later that evening I did wonder if he realised that he was lucky it was only a couple of disgusting old cushions that clocked him on the head - it could have been a bucket load of broken crockery or a three-legged chair!