A Tuesday Tale - don't revisit the scene of the crime

Last Tuesday I wrote about thieves in the skip outside the charity shop and a few folk hopped in with their own stories. I could relate to every single one, pinching things when supposedly trying them on in the changing room was a favourite (Helena mentioned this - her experiences were so similar to mine), but one 'regular' surpassed most of them!

We had a guy, shifty in the extreme, who used to frequent the shop. I coined the name 'Nick' for him and a little press of the panic button underneath the shop counter would alert the backroom helpers that Nick was in the shop. We knew fine well that he was pocketing stuff - silly little things such as small ornaments, the odd book, DVD, little model cars and so on but, despite the scamper of a few watchful helpers into the shop when he arrived, we could never catch him red handed. In some ways I wonder if it was just the challenge of not being caught but perhaps not. Believe me though, he made Paul Daniels look like an amateur.

One Saturday, as we were clearing up after the shop doors had closed - we found something a bit like these, tucked underneath the shoe rack.....gross!! 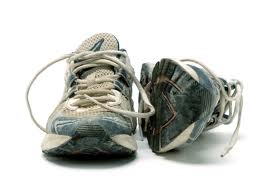 In those days we were trusting enough to leave pairs of shoes on the rack rather than just the one (that changed overnight!) and someone had abandoned their scruffy old trainers and legged it with a pair of shoes.

Our little manageress, called Rita, was livid and almost sure who the culprit was. She took the offending trainers and left them in her little 'office' at the back of the shop to await her chance.

Ha, it didn't take long - on the Monday afternoon, Nick sauntered into the shop where Rita spotted him and sweetly said 'Ah, I have something for you in my office, would you like to follow me'.  OMGosh - like a lamb to the slaughter Nick looked trustingly at Rita and followed. Apparently his eyes were popping as he walked through the 'inner sanctum' and saw the piles of goodies waiting to be put out for sale. Then he stood obediently in front of Rita once they reached her office - goodness knows what he was thinking, he sure was totally oblivious to what was coming!

At that point Rita roared 'Get those off!' - believe me she was a feisty character :) For a split second it seems that Nick could have fleetingly thought that all his birthdays had come at once - but then the offending trainers were thrust at him by Rita and he knew he'd been 'busted'. Gawping like a goldfish he swiftly changed into his old trainers and scarpered with Rita's 'total ban on ever entering this shop again' ringing in his ears.

But this is the part that might have you wondering - how had Rita known that it was Nick? Err, he'd only pinched a pair of shoes that would stand out in a crowd at the best of times, unless you were Al Capone - shiny brown patent leather with white detailed punching on them (all that was missing was a pair of spats)......and yup, he'd returned to the scene of the crime in his usual scruffy jeans and baseball cap wearing the wretched things!

Have  a nice day!