Less Is More - One Layer and Stripes

My heart sank a bit when I saw this week's Less Is More Challenge - stripes and a one layer card at that! Yikes - it took me a few failed attempts at masking stripes before I wandered off in disgust to clear the brain and think outside the box a bit. This was the end result: 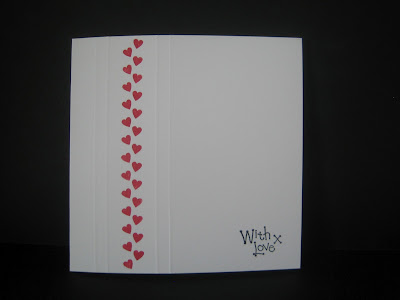 You couldn't get much more 'Less Is More' although it did take some concentration to line all those little hearts up one at a time :) Joke!! I only hope that they count as a stripe and that the embossed lines do as well. If not, I had fun playing anyhow.

I'm entering this into the Less Is More - Week 54 Challenge - One Layer and Stripes.

Short and sweet from me today after yesterday's version of War and Peace:)