There's a bit of the OCD in me working here right now: 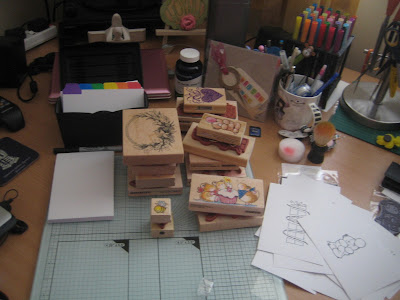 Having looked at what seems 101 ways to organise stamps, as well as watching crafters videos on the same subject until my eyes were popping out of my head, I've finally come up with a system (yay!). There are bound to be things I'll find out along the way but the beginnings are shown on my desk, as it was left late yesterday evening. File box to the rear, white cards in a little pile, heap of stamps awaiting cleaning and some already stamped cards to the right.

I wanted a system to cover several 'Really Useful' boxes of wood mounted stamps which reside stacked on shelves behind closed doors, wood mounted stamps that I think are pretty to look at which live on some small shelves where I can see them - plus a whole ton of unmounted stamps destined to be filed in binders. I can't be trusted to take the rubber off the wood blocks as some people have cleverly done without risking life and limb, plus the pictures on the stamps are often so pretty that they're almost a work of art as they are.

So, yesterday I tootled off out to Staples and bought some heavy duty punched pockets, a couple of rather smart lever arch files for starters and a box file, index cards and 200 white cards to get me going. Am also on the track of some postcard storage pockets which will hold , for example, four LOTV unmounted stamps per page  in their own pockets - gonna order those later on this morning. Acetate/laminated card will also feature in lever arch files.

On my desk there's the very beginnings of Phase 1. I'm starting on the wood mounted stamps to ease into the task so every one of those will be stamped onto a piece of plain card before moving onto unmounted stamps (I'm not too worried about the images being 100% perfect as they're just for reference). On the back of each card I'll write the make and name of the stamp (in pen) and its location (in pencil so I can juggle things round whenever it suits). S= the visible shelf, B1 to whatever = the boxes (only two layers in a box thankfully), F1 to whatever = the numbered file and which page in the file.

The idea of having file card with pencilled in locations is that it forms the basis of the system and will the the first place to look for images under subject headings and their location. As stamps come and go it'll be easy to add more, remove any I don't want any longer (ha, as IF!!) and also to change their location if (for example) I find that stamps in a box can be re-organised to get the optimum 'fit' in the two layers. The boxes won't be as they are now, in a semblance of subjects, it will be done on a 'best fit' basis' as there's a lot of wasted space at the moment in them there boxes. This means I still have flexibility in the actual storage of the stamps - the same will apply to the files themselves. The index system will be the key holding it all together.

The subject index cards are alphabetical but I've just turned the whole lot of them around in one go as the backs of the coloured tabs are blank but still in bright colours and a Fine Permanent Pen is great for writing the subject on - so far I've come up with things like Babies, Flowers, Mice, Teddies - that sort of stuff. Easy to buy more index card sets of course :)

If you want a closer nosey, you'll also see a duster brush awaiting a wash and a round piece of foam beside it. The foam was used to finish off some Distress inking earlier in the week - it's also awaiting a little wash - and it came from a bottle of vitamin pills that Len opened the other day. I've got sponge daubers but I nabbed the foam and really like the gentle touch of it with DIs :)

And, anyone calling in here who plays in the Snippets Playground each week will see the gate keys propped up at the back. Jules sent them to me and they're much too pretty to drop into a drawer so they're waiting there to remind me that they'll be coming on my next outing to Hobbycraft or The Range where they will be bought their very own frame - one of those box ones with a gap between the glass and the back so that the lovely ribbon doesn't get squished and the keys can dangle from a little hook :)

And, if I didn't lose you all about 10 minutes ago - you should now hop over to see what everyone else has on their desk, floor, dining table, ironing board etc. this week over at Julia's, the Queen of WOYWW, who started all this off! Ha, ha - bet she's the only one of us with a deck chair on her desk :)

Happy WOYWW - sounds of regular thumps of inking and stamping coming from North Hampshire will just be me :)