I mentioned my pal Joy the other day - we worked together for a few years and oddly enough got into a few scrapes - our boss called us the Terrible Twosome and I do think we managed to age him by about 20 years :) 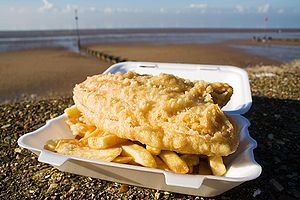 On this particular dark evening we'd left the Carlisle office and were driving back to our hotel when we spied a good ole Northern fish and chip shop. It was emanating (big word!) the most wonderful smells and so we stopped and joined the queue. Hotel food did become quite tiring and this promised to be a yummy meal.

I'd been really pre-occupied making my chip butty, head down and carefully lining up the chips like little soldiers (chip OCD?), and had only partly noticed the only other cars which had arrived in the car park. So, I took a look and replied 'Really parked close together aren't they - they'd never be able to open their doors to get out' and then 'Oooh, look Joy, how friendly - they're passing packs of cigarettes around from car to car through the windows', before returning to carefully assembling layer two of chips in said chip butty. How stupid slow dumb naive can you get!! :(

As it happens, we weren't followed, we did survive unscathed and hid the car round the back of the hotel where we half heartedly finished off the fish and chip supper. The following day, back at the Carlisle office, we discovered that sure enough - where we'd parked was a known local hangout for drug dealers. Ha, known perhaps - but not if you're a couple of innocent visitors trying to have a quiet supper!