This recipe is one of the photos I lost the other week and haven't managed to recover - and I don't do roasted lamb shanks as a matter of course sadly :( My photo had roasted veggies and even some Yorkshire Puddings on but these look exactly the same as mine did and they were absolutely scrummy! 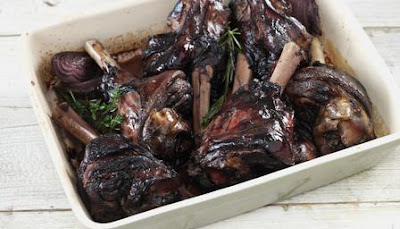 The recipe serves 6 people, I cut the lamb down to two shanks for the two of us but found that I still needed almost a full bottle of red wine for the marinade (ha, not even a sherry glass full left for the cook so I just threw it all in the pot in disgust) and I kept the rest of the ingredients at the quantity for 6 shanks. The marinade is an overnight thing so you have to plan ahead for these. But, they are totally gorgeous and worth the forward planning- trust your Auntie Di's word for it. I bought the lamb shanks in Sainsburys at their fresh meat counter - a decent butcher should be able to oblige but they're as rare as hen's teeth around here sadly :( Even our local Farm Shops seem to have gone all pre-packed and sort of clinical.

Pour over enough wine to cover the meat of the shanks - about a whole bottle - then set the casserole aside to cool. Chill in the fridge overnight. (This helps to tenderise the meat.)

The next day, preheat the oven to 160C/325F/Gas 3. Place the casserole, covered with a lid, into the oven and cook for 2-2½ hours, or until the meat is tender. Slightly uncover the pot for the last hour so that the liquid will start to reduce. If the simmering becomes too lively during cooking, reduce the temperature slightly.

Remove the vegetables from the cooking liquid with a slotted spoon or strain the liquid through a sieve.

Heat the cooking liquid until boiling, then boil until the volume has reduced by half. Stir in the redcurrant jelly until melted.


Serve the lamb shanks with mashed potatoes, seasonal vegetables and the gravy.
Or be like us and make it like a 'proper roast' :)
Not a last minute dish to prepare - you have to chuck the lamb shanks and marinade into a pot the night before (difficult?) and it just cooks over a long time when in the oven - the smell is fabulous too :)
Enjoy!
Di
x
Posted by Di at 06:31