This recipe was one of the photos I lost last week - but, I managed to find a free photo which is a very close illustration of how it turns out - after all, one crumble is much like another - I didn't think an image of a stick of rhubarb would be the same :) 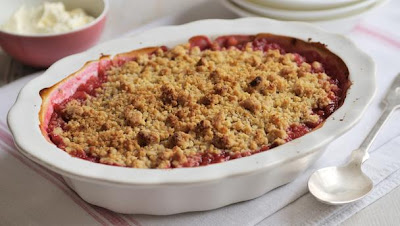 Put rhubarb into a heavy-based saucepan with the orange juice, zest and water. Simmer on a low heat for 15-20 minutes until soft. Strain and put rhubarb into an oven-proof dish.

Sprinkle over the stem ginger pieces and pour over the ginger syrup and sugar. Allow to cool. NB I didn't like the idea of these additions just sitting on top of quite tart rhubarb so I stirred them into the rhubarb in the dish.

Meanwhile, make the crumble mix. Sift the flour with the salt into a bowl. Rub in the butter and when the mixture resembles coarse breadcrumbs, mix in the sugar.

Sprinkle the crumble over the rhubarb and place the dish on a baking sheet. Bake in the oven for 30 minutes or until hot and slightly browned on top.

Had a bit of a laugh at the recipe (a Prue Leith one saved from The Mail newspaper many years ago and never used until now) - it said 16 oz of flour for the topping instead of 6 oz. Not thinking, I'd weighed the flour out and then common sense kicked in when I realised I was going to be up to the elbows in flour :)) Double checked with the metric weights and sure enough, someone hadn't done their proof reading before going to print had they!?

I cooked this for friends the other weekend - just did the rhubarb stage it all cooked and in the dish to one side with the crumble mix all ready done and in a poly bag in the fridge. Once the main course was almost cooked it was just a matter of sprinkling the topping onto the rhubarb and popping it into the oven.

Ah, in case anyone wonders where I got rhubarb from right now - we had some (homegrown too) still in the freezer from last Summer. Not quite enough so I bought a big can of rhubarb and drained it well then mixed it into the cooked rhubarb before adding the ginger etc.

This was yummy with custard/ice cream - and Leonardo, the two-legged mouse, polished the remainder off when our friends went home :)