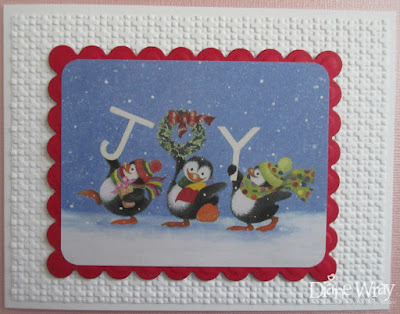 This is a cute LOTV topper Di and I love the scallop mat and the pretty embossing in the background too. x

I want to have those penguins. They are so cute!

Just so sweet Di, it just pops from the bold embossing.

A great card Di, I love the cute penguins (I have that Art Pad too!). Visiting today with my DT hat on, so thank you for joining us at the Rudolph Day Challenge and good luck.
Kath x

Great card, Di. I love these art pad images and wish I had every pad evermade!

Of course you have used my fave EF ever...that is Stampin' up one methinks,,,the one that is discontinued. I always hope to find it at the garage sales at our local scrapbook stores.

Visiting your blog today with my Rudolph Days DT member's hat on. Good luck in the challenge - thanks for joining in. xx

Hi Di,
what a very super Rudolf card.
The embossing is wonderful, and your image of those penguins is such a cute one.
Lots of crafty love. Jenny L.

Oooh this is sooo adorable

I love this gorgeous image it looks great against the embossed backed ground.

This LOTV image is so cute!! Love how it pop out from the embossed background, the red scallop frame is a great choice!

Very hard to believe we are half way to the holidays! That Square Lattice is an amazing EF. It can add such texture to any type card. Nice addition to your stash.

This is such a cute card. Love the sweet image.
Thank you for joining us at Rudolph Days Challnege. Good Luck.
Hugs,
Valerija - DT member.

Super card Di and a great design for a batch make. The LOTV topper looks fabulous against the embossed background xx

Need to do some Christmas cards... might get round to it by November!
Great card - LOTV toppers rule!

Such a sweet Christmas card. Think I've got that pad, must dig it out and have a play. Cara x

Awww what a cute image l just love it x

This is super cute Di and I love the texture that you've added with the embossing folder :) X

These penguins look like they are having so much fun in their Christmas parade. What a lovely card.

Brilliant card Di, and a great fun image, like the embossed background.
I have quite a few left over LOTV pre-coloured images that I can not use again for a card so I am going to make tags with them this year.

That's a fun topper, Di, and I love it with the scalloped panel and embossing!! Hugs, Darnell