The other week a neighbour was whipped into hospital, with what turned out to be appendicitis. Once she was back home to recuperate from surgery, we gave her this card: 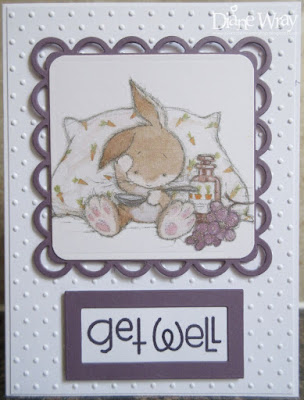 - the image is a pre-coloured LOTV one, bought ages ago. Die cut using a Spellbinders Nesties square die with each corner rounded using a Woodware rounder punch

- die cut a purple frame using Impression Obsession's 'Rectangle 6-in-1' frame die (I'd already established that the sentiment and frame would fit one another of course), trimmed the sentiment and glued it behind the frame

- then it was just a case of making sure I positioned the topper and the sentiment correctly onto the card front, using thin sticky pads. Having the lines of embossed dots as a guide was a huge help :)

When the in-house critic saw this he really liked it a lot, then said - 'but why is the letter 't' upside down?'. Try explaining 'funky fonts' to a non-crafting fella! Of course, it then started to bother me as well :)

Isn't it the way. I'd just given a box of 90 assorted cards to a local care home for the residents to use - and had almost cleaned myself out of finished cards here. Bit of a scramble to make this one - that'll larn me!