Aware that my target of 12 Christmas cards per month is slipping, I whipped up a couple of quick cards to at least achieve the end of May total: 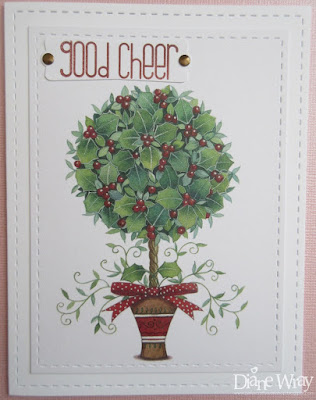 - 6" x 6" white card blank, the front of which which I then embossed using the largest die from the Lil' Inkers 'Stitched Rectangles' set and then trimmed the card down to size (4.25" x 5.5")

- image from the now discontinued LOTV 'Festive Foliage' Art Pad, die cut using the next size down die from the 'Stitched Rectangles' set

- my first attempts at stamping a sentiment in the top left hand corner smudged on both panels, ack! Basically, the most used stamp in my Personal Impressions 'Many Greetings' set has gone all floppy and over-flexible, sigh

- so, instead used a stamp from the Paper Smooches 'Christmas Sampler' sentiments set (love this set!) and a 'Coffee Bean' Brilliance ink pad on some of the plain white card trimmed from when I made the card blank

- glued the image panel onto the card blank

I was quite upset about the original stamp I wanted to use going 'all peculiar' on me - despite being cared for, never used with solvent based inks, always carefully cleaned after use and stored away in the dark. But, the set is many years old and has been really well-used so it owes me nothing. Luckily, I found a supplier who still stocks this much loved set - phew :)