Bit of a gasp here when I saw what this week's challenge is over at Less is More - 'Use a Stencil'!

I confess to having a host of pretty ink pads, plenty of brushes and a good variety of stencils - mostly unused due to the fact that I like stamping and die cutting more than messing round with other stuff. But, undeterred out came the stencils, ink pads and a Clarity Stamp brush - and this was the result: 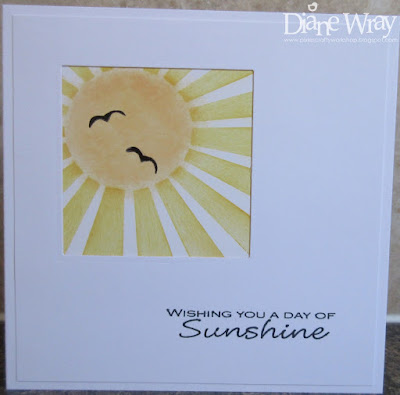 - a piece of Clarity white coated/silk card onto which I stencilled the sunburst using a Stamposaurus stencil and Distress Ink pads (plus the Clarity brush of course). The Distress Ink pads were 'Scattered Straw', Wild Honey' and 'Dried Marigold'

- took away the removable tape and stencil, which revealed a white circle for the sun itself. Dithered about cutting a circular aperture through which I could add ink to cover the white but just decided to go for it without and added Adirondack 'Peach Bellini' ink to cover up the white sun

- decided to stamp the sentiment next rather than risk wrecking a completed card front, using black Archival ink and a stamp from the Inkylicious set called ''Sunshine Wishes'

Apart from the time it took to clean up the trail of stuff scattered all over the desk, including stamps, brushes and stencil, I really enjoyed playing so watch this space. But don't hold your breath either :)