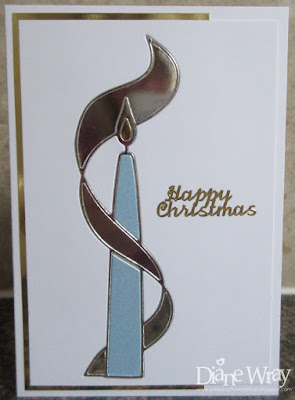 This is one of the prettiest dies I've ever seen! I love this beautiful card with gold, silver, and blue! WOWSAH!

A lovely card Di - I do like this die, it's on my growing wish list!
Kath x

Stunning card Di, I really like your idea of the partial mirri card frame!
Janice x

It looks very classy, Di! Clever idea use scraps of mirri, they are just perfect!!

This Di is amazing x

Beautiful CAS card, Thank you for joining us for Merry Monday.

I love this fabulous die, and your card is beautiful.
Jean x

Hello Di,
What a very elegant card. Congrats on making 12 Christmas cards a month!!! You are right, Christmas will be upon us sooner than we think!

A very classy card Di and a lovely choice of colours, this is a really fabulous die and I feel that it hasn't been given enough recognition as when do see a card using it, it makes me want to use mine again but otherwise the poor thing sits neglected but at least it doesn't date, a bit like me I don't go on dates anymore, ho, ho, ho.

I love the mirri card on this design. It adds a certain elegance, or as they say in the extra fancy circles "It's bitchen!"

I think this gorgeous candle die is so elegant Di and the colours work beaitifully and love the partial frame idea. x

This is beautiful. What a gorgeous die cit

I almost bought that die the other day--just love it! Love the colors you used, Di!

This is stunning, so crisp. Cara x

this is so classy and elegant - love it - looks like a winner to me!!

This so lovely. That is a wonderful die and creates a striking card.

I think this beautiful candle needs to make more outings, Di! This is so elegant! Thanks for sharing with us at Merry Monday!

I love this die, it makes a beautiful card. The colours you've chosen are lovely. The die has been on my wishlist for ages, but hasn't quite made it to the top. I think I might give in to temptation before this Christmas. xx