For this card I decided to use the same Happy Birthday die that I used on my Sunday Snippets card, to show you how well it works on either one of the two top corners. It's also a reminder that a corner Happy Birthday die exactly the same is on offer as part of this week's Snippets Playground prize: 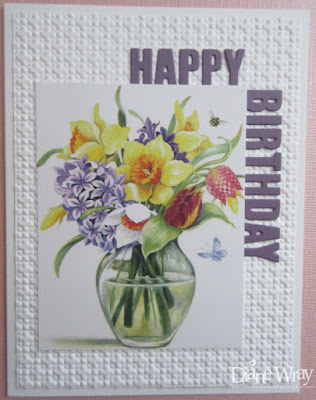 - piece of white card, embossed using SU's 'Square Lattice' embossing folder and trimmed to slightly smaller than the card front before being glued in place

- an image from a now discontinued LOTV 'Spring Flowers' Art Pad (pre-coloured, which is why they were so useful, sigh)

- glued the whole panel in place on the card front

There's yellow in the flowers and also a little blue butterfly beside the vase!