That came around fast! It's time again for Mo's monthly Rudolph Days challenge where you have from the 25th to until the end of April to link up a Christmas card - with the chance of winning either a lovely poinsettia die or a really cute stamp.

Oh boy, did I struggle making my entry :( I had a lovely new Poppy Stamps die to try out and I just couldn't get a decent cut of the central snowflake part at all using anything more than just thin card. It was almost as if the die was blunt. I did Percy Veer though, trying many different combinations of sparkly card, sticky backed card, mirri card etc. etc. and eventually ended up with a result which didn't go into the bin. Not sure if I have a duff die or perhaps my Cuttlebug is feeling its age? :( 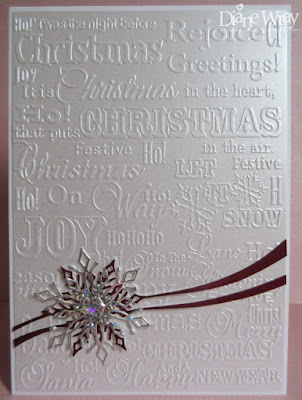 - Poppy Stamps 'Snowflake Ribbon' die and (after much trial and error) satin deep red mirri card - which looks black in the photo!

- I stuck the die cut in place onto the embossed panel using very narrow red line tape and left a bit of overhang. Trimmed off the overhang from the reverse side to get a flush cut along the edges of the embossed panel

- next, die cut a larger snowflake from silver holographic card backed with medium grade sticky sheet, using a Memory Box 'Lindeman Snowflake' die and popped it on top of the deep red snowflake (that cut beautifully)

It's strange really, as you know I frequently buy duplicates of stuff so that I can offer one as a Playground prize. I really hesitated before ordering this die and decided to only get the one until I'd had a play with it - thankfully!

I've since wondered if the design of the die with the long tapered ribbons (which cut perfectly) and then a really heavily detailed snowflake bulking out the centre is part of the problem. I tried it at all angles using different shims and places on the plates - and the more I think about it the more I feel there's a connection between the design of the die and my problems. Sigh :(

Unless any of you sweeties have any thoughts? And you know what made matters worse? I'd already embossed and trimmed the backing panels for three cards when I began die cutting - being a stubborn mule though, I did in fact manage to complete three cards the same!

I've emailed Poppy Stamps, so far no reply but I live in hope.