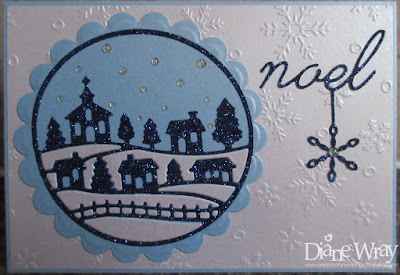 How frustrating Di and I can understand why it went straight into the bin but the finished card is really pretty and I love the colours and the scalloped mat it is sitting on, and the pretty embossed background and die cut sentiment go beautifully. x

For all the suffering you endured getting this card finished - it really is beautiful and looks perfect! I feel your pain however - I spent $25 for an overall die at a stamp show some years back and I've never gotten a single cut from it that came out good enough to use on a card! UGH! The frustration is NOT worth the trouble, but at least yours was free!..........sigh

You dun arf pick em Miss!. Result is a big pat on the back though for sheer perseverance and a beautiful card at the end of the tunnel. Hugs Mrs A.

You did well to persevere where most would have given up! Worth the effort Di it's lovely xx (had to laugh predictive text spelt your name as die rofl)!!

Despite the problems you had, you've made a lovely card Di, well done you!
It's such a shame that these free gift dies often don't cut well through our machines.
I rather like the look of the tuille biscuit though!
Janice x

Awww . . . I FEEL your frustration! I would have thrown it forcefully into the bin too! Still . . . at least you managed one card, and a lovely one at that.

What a shame the die was such a pain as you've created a beautiful card with it. I think it would have gone flying down the garden if I'd had it!

Yeah, I know just how you feel. I've added quick release foam to some of my dies which I find helps a lot (although no good for those that you emboss)
It's a really lovely card though and such a pretty scene xx

Well done for getting at least one card made with this die. I didn't have trouble with it bending but like you almost lost the will when trying to reassemble it by popping the 'waste' bits of one colour into the whole die of another colour. I didn't use sticky backed stuff with mine and spent ages chasing little bits of fencing and so on around my glass mat and decided the 'stars' in the sky was a step too far - used glitter for those!!

What a pain Di....it's such a pretty card but I agree not worth the hassle. I have got to get that snowflake embossing folder. ..one of my Christmas faves I saw you use.it's on my wish list ...do you think Santa's listening already? Lolol xx

Oh my!! Such a busy work!! You have been so patient with all the tiny pieces!! But the result is beautiful, I think you have made a great work!!!

Well done Di you did make one beautiful card. I see what you mean there certainly are LOTS of little bits. I threw a die away last year. I also passed one on to a friend to try and she thre that one away for me. I wonder about some of the freebies. Barb xx

Don't know whether my first comment arrived or not as when I hit the publish button it took me to YouTube!!! Anyway what said was despite all the problems your card was worth all the effort. But I still haven't used mine so the question is don't try it or just save myself any hassle and put it straight in the bin?

A lovely card Di - what a shame the die has gone into the bin! I've got the same die and have used it loads - mine is still flat and has always cut well. I don't use the adhesive sheets (I can't get along with those) so cut my pieces, then sprayed the back of the main outline with Stick and Stay. I used Tombow glue on the actual backing of the image and then a jewellery pick up tool for the small bits.
Kath x

I am so glad to read that I am not the only one that gives up on a die. I usually pass it o to someone else to see if they can do better. I can't stand to keep it around!! Thanks for sharing the info!

Fabulous card, Di. Shame you had such a problem with the die. I remember seeing this magazine with the free die and kicked myself later for not buying it, but it sounds like I did well to keep my money in my purse! x

Hi Di this is a gorgeous card. I am so sorry that you had such trouble with the die I can understand why it ended up in the bin Life is too short. Take care. Hugs Jackie

Oh dear Di, what a pity! Still you have got one stunning card there. x

Oh dear, sorry but I am really chuckling here, just so pleased it is not just me. At least you should get some satisfaction that you actually beat the die and made a wonderful card in the end, usually with me everything goes in the recycle bin.
By the way the 21st card still not turned up and the card I entered in the NBUS challenge is the replacement and I hated making it because it was really un-necessary as I had already made one, if you get that.
Kath xx

That sounds awful! I have had dies bend too..it is so frustrating to try and flatten them again. I find once they bend badly they never cling properly tot he magnet sheet anymore...sigh.

Totally understand why yours went into the bin...but your card is so lovely!

Hi Di, Well worth the effect your card is gorgeous l love the blue card behind the image to give a blue sky so well presented as for the wax paper l see where your coming from it's happened to me take care xx

Oh dear dont you just hate it when a craft product behaves like that. I have had bad experiences with dies from some "famous" companies too!!
PS : I am having a celebration on my blog...please do drop in when you can.Here is the link : 5 Million Page-views Celebration

Oh, what a nightmare! But it does make a lovely scene and fabulous card. You may need to frame this one :)

Now you know why it was free, they were over it too!!! And inflicted it on others. Totally badly made designed..
But same can't be said for your magnificent card!!! Love it Di,
Shaz in Oz.x

I too have suffered from 'free dies' curling up! As well as one that came from a top notch company that I have not been able to cut properly once! Sadly it does happen and those are the dies that go in the bin pretty quickly. Karen x

This is a really pretty scene! Too bad the die was so uncooperative! Kudos for sticking it out and releasing all those little pieces!

Hi
How charming. I love your image choice. Thank you for sharing this with us over at Crafty hazelnut christmas challenge2
hugs Lisbeth DT