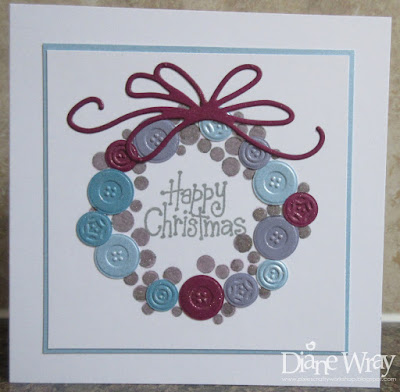 Oh Di, this card is wonderful! I never use buttons on my cards because they're so hard to adhere, and bulky. These embossed die cut buttons are the perfect solution and your color combo is perfect. I loved reading about your solution to using colors that turned out not to be what you wanted, and it was all worth it in the end

What a great idea for keeping your cards flattish yet still using buttons. And a super colour scheme too, fab card.
Jane

This is so very different die and very inspirational, I always love a crafty wreath.

You were closer than you realised to the gown gaping, it was only after I'd been across the corridor to the loo twice than a nurse can and showed me there was a side look to pull the cord through to protect the modesty !

I love your card - what a great idea to use card buttons to keep it nice and flat for posting! Great colours too.
Kath x

What a great card and well done for keeping the depth down with postage in mind, especially for Christmas time. I have that little embossing gizmo too ... somewhere ... must dig it out for an airing so thanks for reminding me of something in my stash!!

I love the little buttons and they make such a lovely wreath. I like the colours you landed on too. I always have a few cards marked for local delivery as they are too bulky to post. I try not to make too many though! X

Oooo what a super idea and i have a very old Sizzix button die, that i have never used, you have inspired me to get it out, thanks, Luv Sam x

What a great idea to use faux buttons! Love the colour scheme, Cara x

This is a fantastic card Di. What a great idea using buttons and I think the silver looks really good. I have this set and inspired by you am going to make some similar as birthday cards. Barbxx

Wonderful card, and the idea of the diecuts buttons is just perfect to make a wreath! Love the colours, you have saved all your work so well!

Fantastic Di, I really love this! The colour combination is so pretty too. x

You are too clever Di. Love this idea. Any card with real buttons is so hard to mail, but this is perfect.

What a cute, cute card and I love the colors you used! And best of all, it's flat for mailing...yeah for you!! :0)

What a great idea, love the card buttons. x

I'm glad you weren't stumped for long - your card is fantastic!!! Love it!!

gorgeous wreath!! clever to make your buttons out of cardstock!! (thanks so much for your lovely comment!)

Great job on your button wreath. Just so cute. Thanks for joining us this week at Merry Monday.

I like the die cut buttons and the colours you used, including the silver.
Jean x

A fabulous idea Di, love the die-cut buttons. I have some Memory Box ones which I love using.
Janice x

The is absolutely fabulous Di, I love the colours x

Yay for cardstock buttons! Love your wreath and that gorgeous bow! Wish I'd thought to use my WOS on my buttons! Thanks for sharing with us at Merry Monday!

LOVE the colors on this card and aren't you the clever one to use card for your adorable buttons. Kudos!

Love the fun colours, fabulous card. Thank you for joining us for Merry Monday.

Congrats on your HM at MM, Di!

What a clever way of using buttons - love the design. I think I've got an old Sizzix button die, I must dig it out. xx

Gorgeous card as always Di your so talented x

Clever idea, Di... using your folder for the buttons. Thankfully I have several button dies. I may have a few 'oddments' that are not my cup of tea but may be yours? Email if interested and I will explain :)