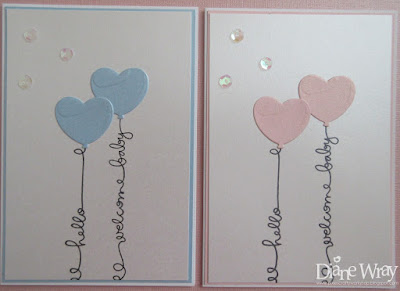 Absolutely perfect for baby cards...what a fabulous idea!! I wonder if I have these stamps or some like them...hmmm!

Wonderful combinations Di, don'cha love it when things work so brilliantly like that..
Thanks so much for sharing, Shaz in Oz.x

These are so sweet! What a great idea. I loved Helen's too...such a lovely stamp set you both used for the stems/stalks...

Was busy this seek with baby cards too! Just popping over tot he workshop to drop one off! lol

What a great card Di, the sentiment works perfectly for the strings. You need to start looking under cabbages for babies now ;0) xx

Lovely new baby cards - a great idea to use the stamp as balloon strings.
Kath x

Brilliant, love this, the colours, and design is gorgeous.xx
{aNNie}

Smart thinking Di! Love this idea and it's always good to have cards for the "rarer" occasions to hand.

So sweet! Thank you Di for a very good idea!

Such a cool idea, love the way you made one of each, why don't I think to do that! The sequins just accent the design perfectly. Cara x

How sweet, I love the sentiment too! xx

What a great idea to use the sentiment for the strings of those pretty heart shaped balloons Di. Fabulous! x

Brilliant Di!!...Fantastic cards and idea. Be careful what you wish for though!!!

Lovely cards Di. What a great idea. I NEED sentiment stamps like this. Barbxx

Oooohhh.... So clever use these sentiment for the strings of the balloons!! I have some stamps as these! Thanks very much for sharing!! Your cards are very sweet!!

Those swirly sentiments are lots of fun!What a cute idea for baby cards,Di!

Love these Di! Think I might have to *borrow* your balloon string idea!
Helen x

How perfect for twins! Really clever, indeed! So sorry about linking up a second card, I had no idea, but I totally understand. I don't know how you can keep up with everything anyhow - you wonder woman!! I won't do it again, but don't worry, it takes a lot more to get rid of me. Your playground is just too much fun to visit!!! I'll be back, for sure!

A great idea using the sentiments that way.

These are very cute cards. I've always like that look of a scripty greeting for a balloon string. I've never done it though. I'm sure I'd get them all cockeyed if I did!