And another week just flew past, probably due to it being a lovely, long Easter weekend. And we've had some fabulous sunshine in the Playground, although today (Saturday) it's raining cats and dogs :(

My snippets card this week was triggered off by a really sweet die set I spotted on a blog not that long ago. I really should make a note of just where I see these goodies as am sure it was a playmate who 'enabled' my purchase, once again!

This is my version: 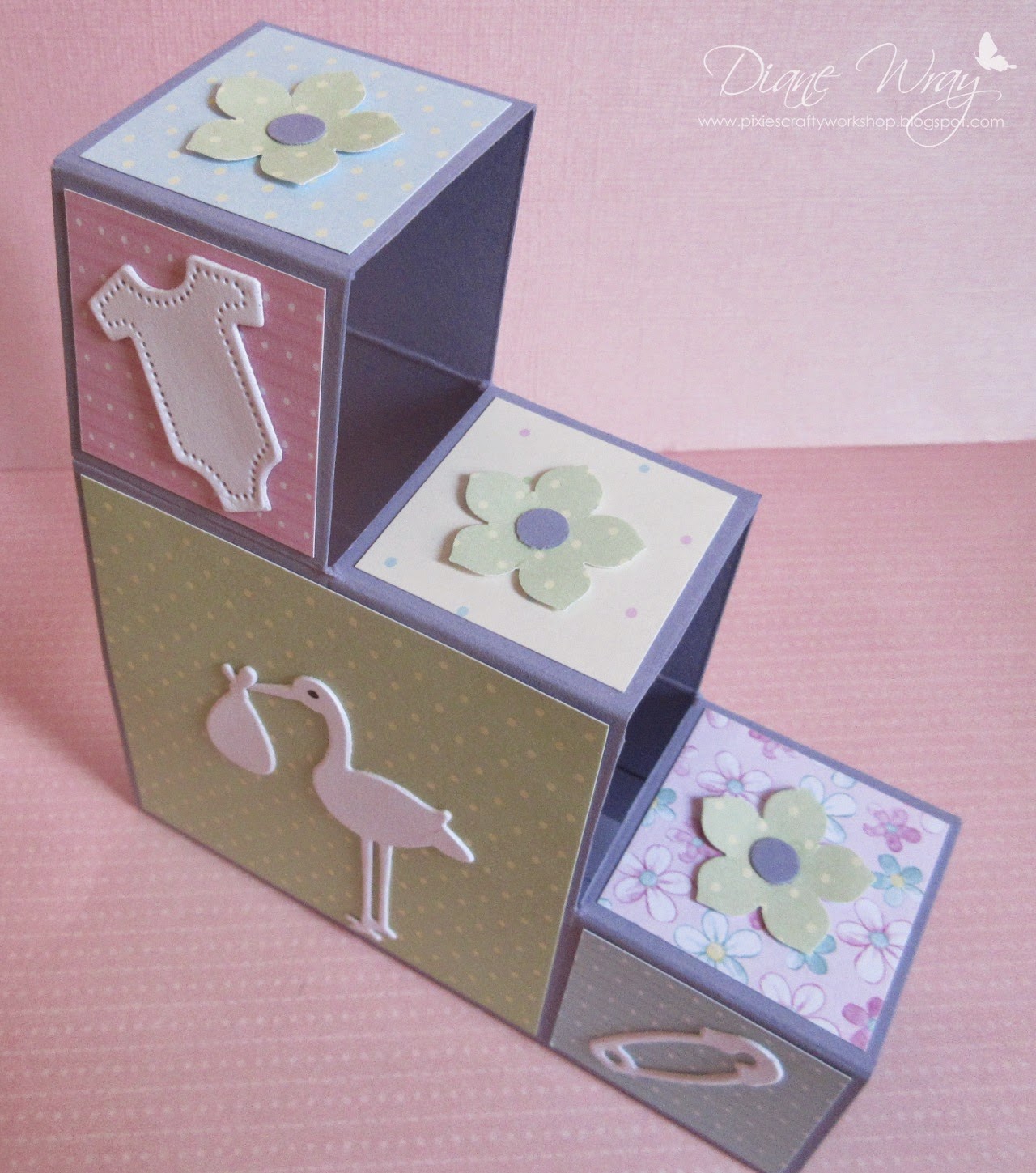 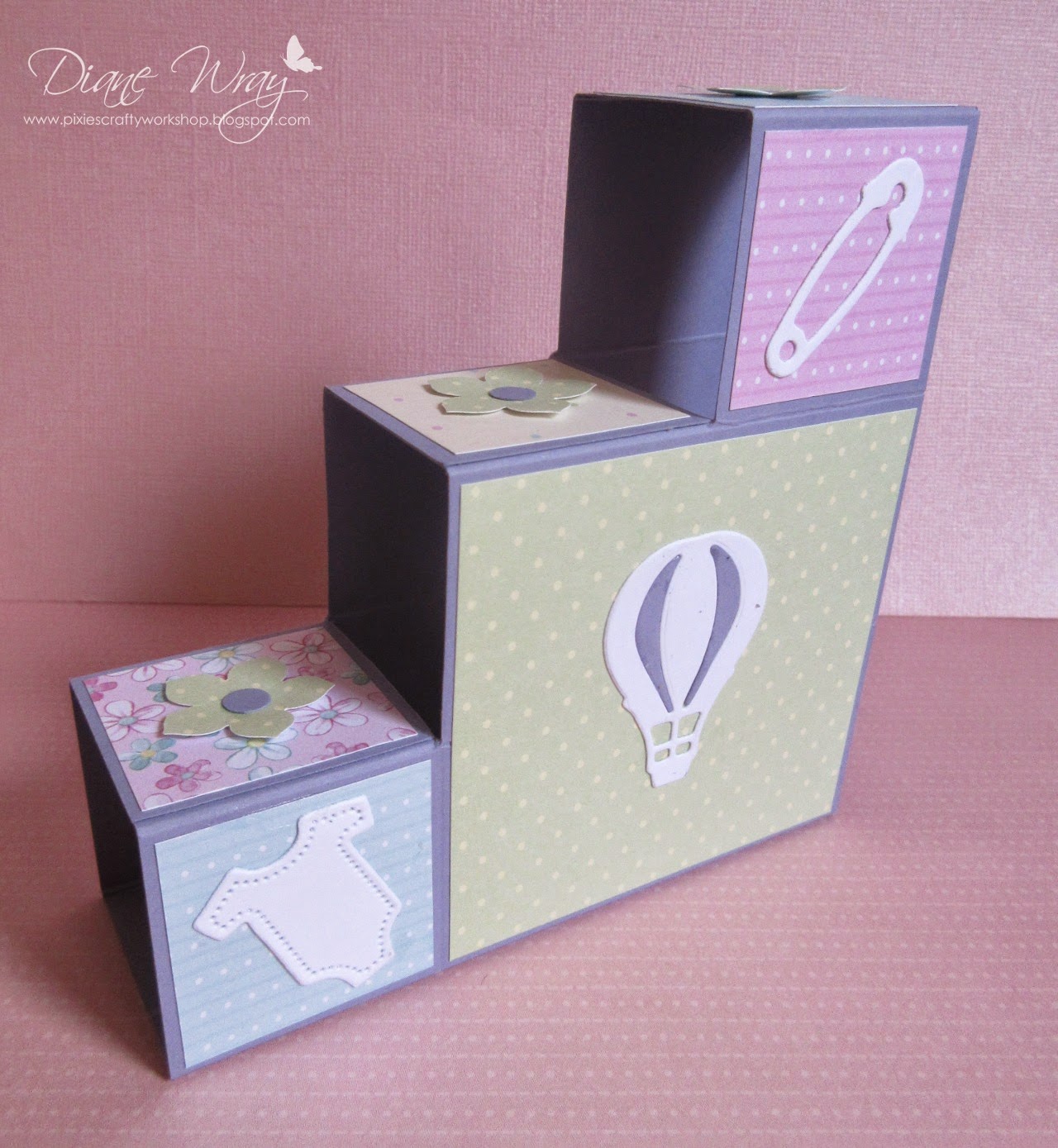 Back view
I used:

- then I scored and snipped the card, using my Hougie Board and just some sharp scissors

- then the 'step shape' was stuck together as per the tutorial mentioned above - I used the ultra strong red line sticky tape, with care as it's very unforgiving if you get it wrong!

- after that was done, I cut a selection of one and three eighths squares of paper from snippets tucked in the back of a Tatty Teddy paper pad called 'Spring Chic' - ahem, I had to rethink that one after the next step!

- then took the new die set called 'Baby' by Little B and cut out a selection of white die cuts from snippets, plus a little bit of 'Wisteria Wonder' for some extra infill on the balloon which is on the back of the block step card

- and then I gawped at the block step card and had a funny turn. The dies, albeit really small, mostly are too big for a square of one and three eighths of an inch - grrrrrrrr

- but, undaunted, out came more snippets and this time I cut two panels which would cover four squares in one go (each one of the pieces measures two and seven eighths of an inch) so I could use two of the larger die cuts. Bingo!

- next all the paper squares were stuck on using Collall All Purpose glue, and the die cuts were added as per the revised plan

- then added a circle of 'Wisteria Wonder' in the centre of each flower, punched using an ordinary office file hole punch

- final touch, so the stork could see where he's going, I added an eye using a black fine liner (did it in pencil first to be sure he looked ok)

So, out of the jaws of disaster I think I snatched victory - so long as purists don't insist that the blocks really should all have equal sized squares on 'em!

OK, onto this week's picks now: 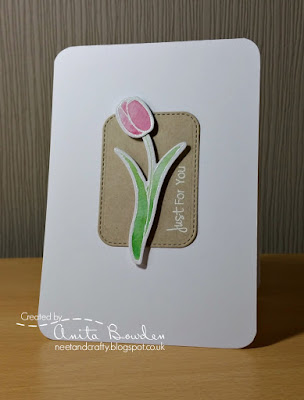 I just love this clean and simple card, made by Anita (Neets) - and it's a great example of how just a couple of little snippets can go a long way. 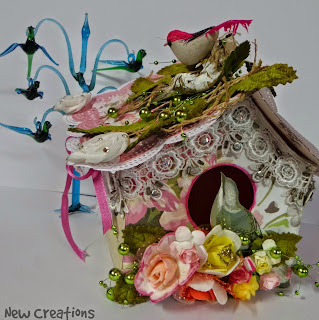 And there again, you can use lots of snippets and come up with this wonderful bird house - made and lovingly decorated by Vinita. Lots of instructions how to do this over at Vinita's blog too. 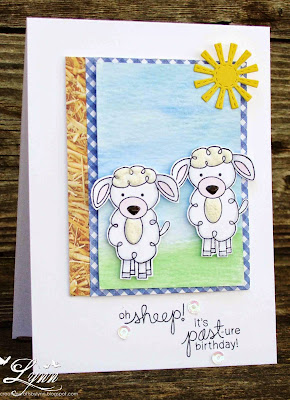 Lynn (Jimlynn) can always be relied upon to give us a smile - such a cheeky card, love the sentiment and the snippet of hay patterned paper down one side :) 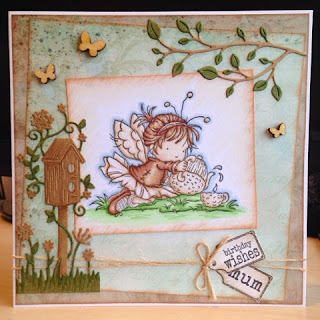 Lucy makes the most beautiful cards and her colouring is just stunning - how could I not pick this little sweetie? Lucy is (very deservedly) Guest Designer over at 'I ♥ Promarkers' - well done chick! 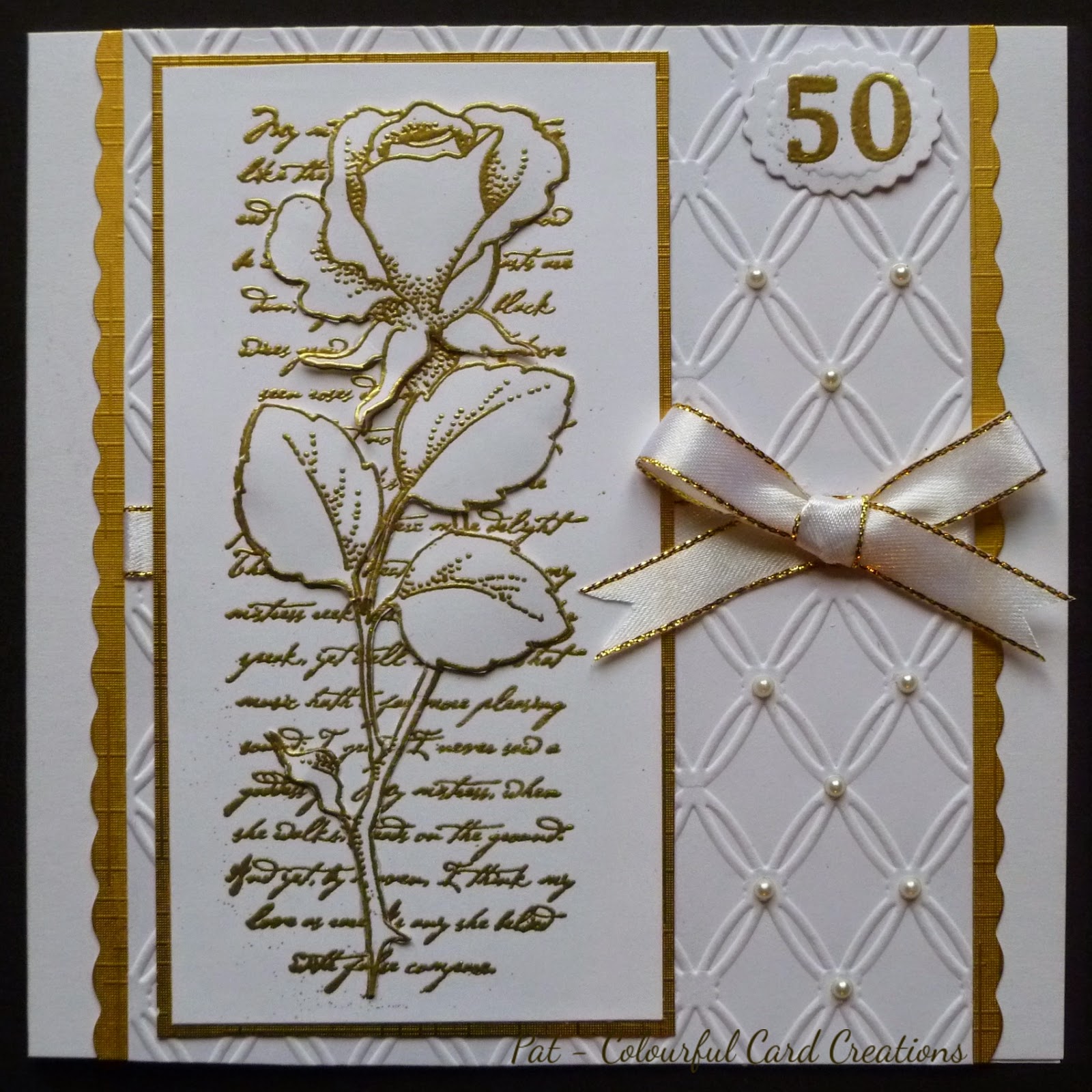 This card, made by Pat, just leapt out at me this week. It's absolutely beautiful and such a perfect Golden Wedding design. I love it! 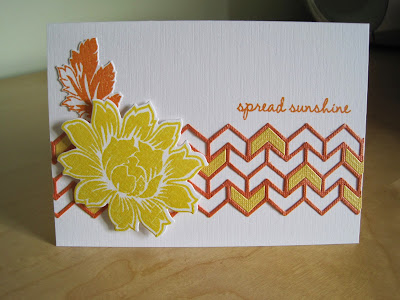 And last, but not least, Carole brought us this lovely sunny card to show. And, as Carole says, she also has enough leftovers from the die cut chevron border to make a card in reverse colours too :)

We had two new playmates this week: 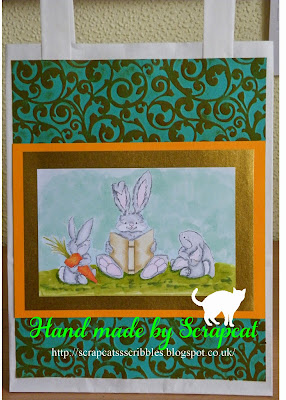 Scrapcat whizzed in during the week waving this adorable gift bag. 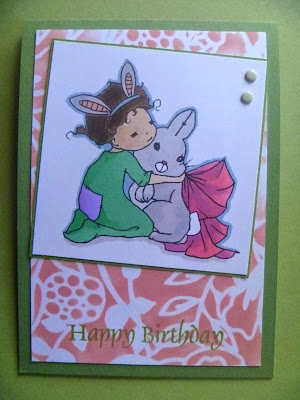 And, right at the last minute, April dashed in with this cute card.

Welcome to the Playground - and I hope you come back and play again soon!

And now for the winner of the Art Stamps 'Owls':

Well done Jenny! I've just hopped over to your blog and know that you love owls, and that you've used the 'tree bark' embossing folder to cut out a hole for an owl previously - bet that's where I got the idea :) So I can already see these owl stamps having a good workout :) Can you please let me have your address - I know you won back in week 130 but I can't find your email letting me have your snail mail address. (di_wray@hotmail.com) I'll post your prize off this week!

OK ladies, you might already have guessed what this coming week's prize is: 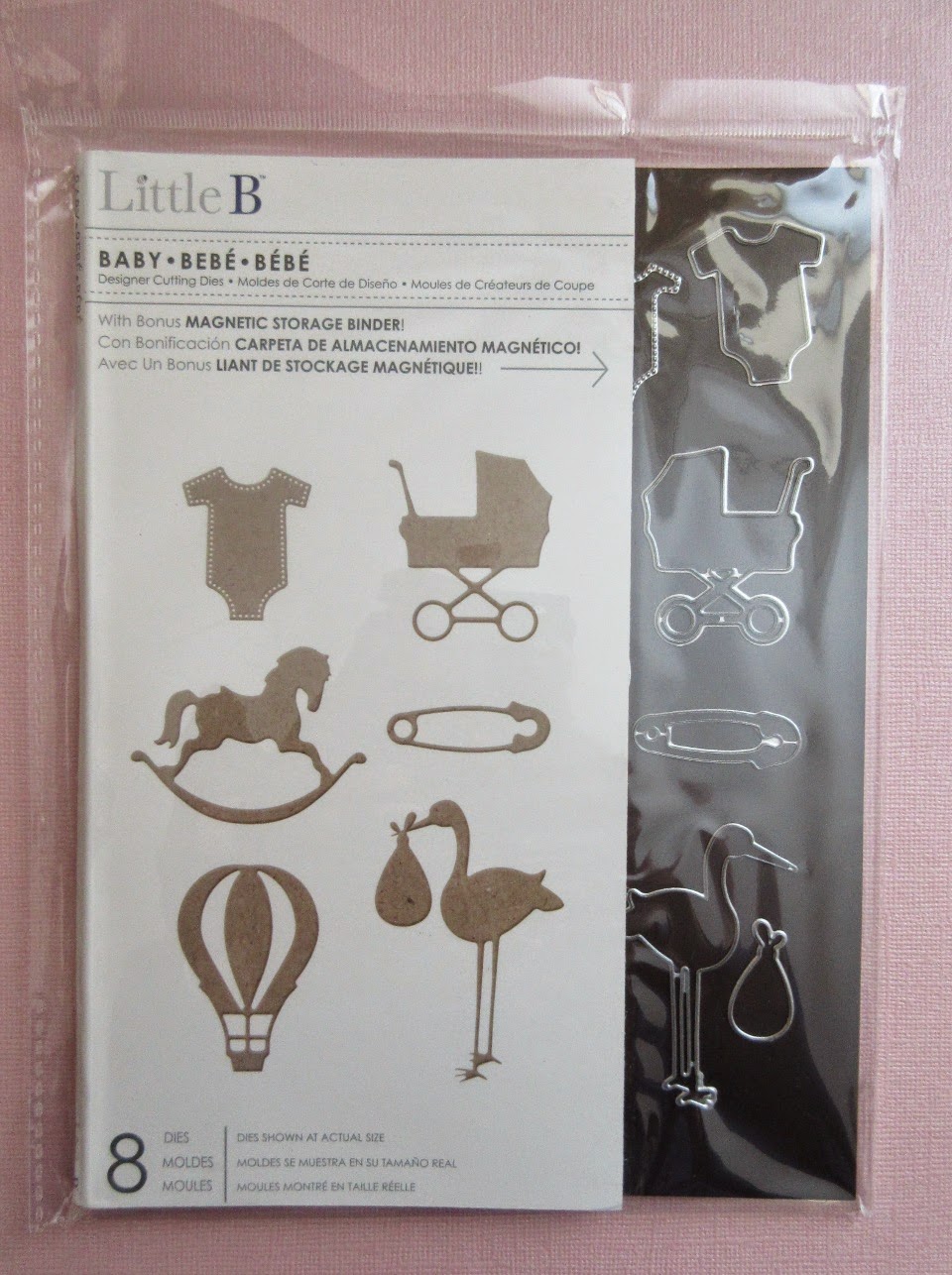 Yup, it's a die set exactly the same as the one I used today - 'Baby', made by Little B. The set comes in its own magnetic folder (some of the dies could easily be lost otherwise) - I've placed my little dies underneath the flap on the set - I think they're out on display purely until bought. They all cut beautifully with no release paper or such needed to remove the cut out dies as well :)


The Snippets Challenge will run for one week and the Playground gates will close at 11am UK time on Saturday 18th April. The gates will open again at midnight UK time on the same day.

Maximum of three entries and please say 'Yes please' (or similar) in a comment if you wish to play and be a possible winner of the prize.