We have another fun challenge over at Cuttlebug Mania this fortnight, called 'Cute as a button'. Loads of scope there peeps, I'm sure everyone has at least one spare button hanging around! Just so long as you use a manual die cutting/embossing machine that's fine, and also do remember to say which embossing, die cutting products you used.

Our sponsor this fortnight is Ooh La La Creations - and there are some gorgeous goodies in their store, including charms, embellishments, bling, CDs and of course some absolutely fabulous buttons!

So this is the card I made, using my trusty Cuttlebug - it all started with the 'buttons' embossing folder I used, and the card just evolved round that: 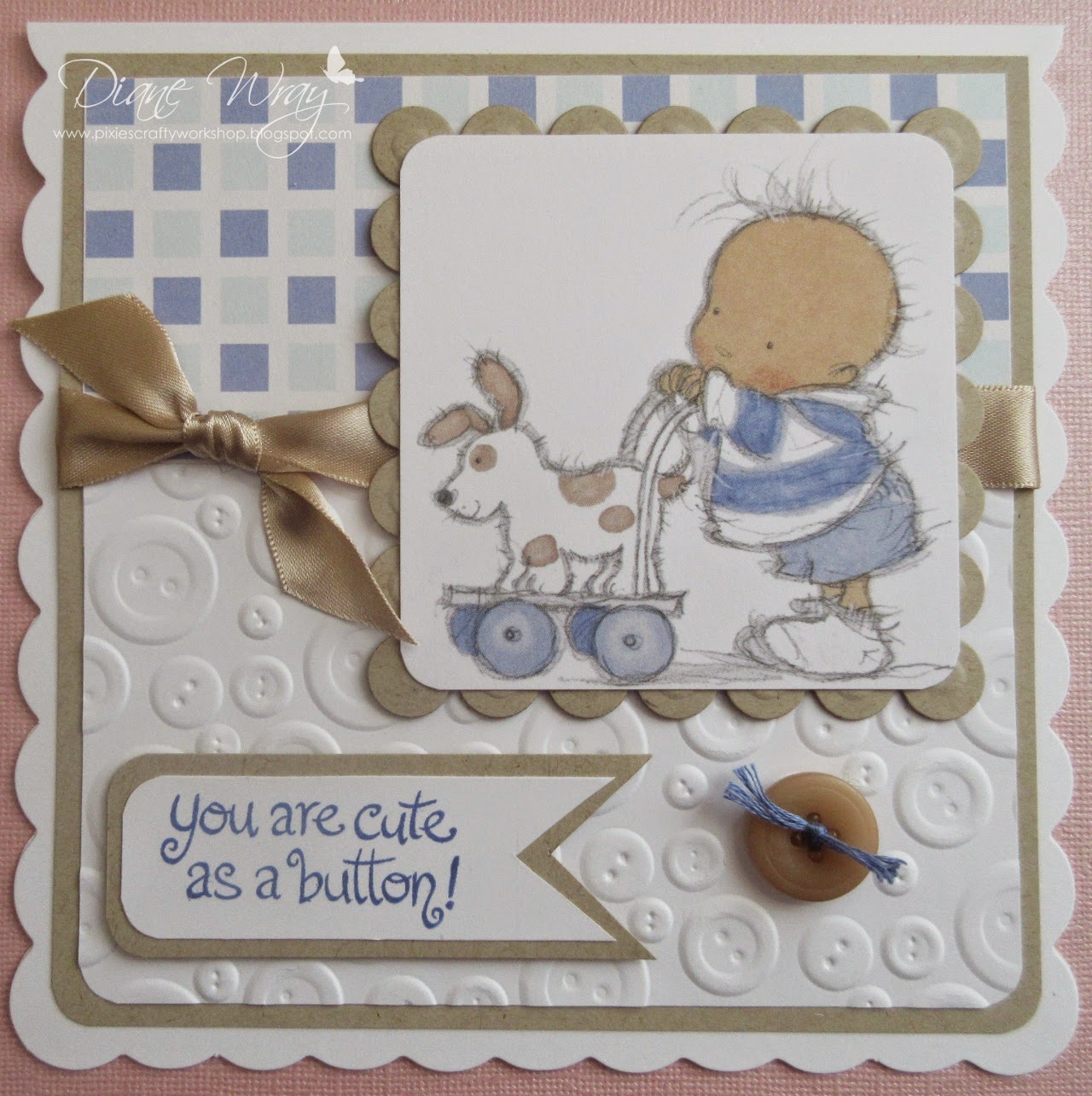 - sandy coloured backing card, which was a bit of a find. I totally love 'Crumb Cake' by Stampin' Up but the other day I found, in my box of card kept especially for stamping and colouring, some Neenah 'Desert Storm' card - which is a perfect match

- the image is a pre-coloured LOTV one from way back when, but I see it's still included in their current 'Toddlers' Art Pad. I just trimmed a whisker from each side and rounded the corners with a Woodware punch

- mounted the image onto a 'Desert Storm' square, die cut using a die from the Spellbinders 'Scalloped Squares' set

- as already said, the white panel on the lower part of the card was really my starting point when I designed the card. I've used this embossing folder (Boofle tri-boss embossing folder 'Mixed Buttons' just once back in 2013 and was determined to give it an outing

- that gave me a nice firm backing which I could pop a piece of beige ribbon on, to hide the join between the patterned card and the embossed panel, then just knotted a snippet of the same beige ribbon round the ribbon band

- the sentiment was stamped using Memento 'Paris Dusk' ink and a sentiment from the Lawn Fawn 'Sew Lovely' stamp set - I think this set is worth it for that sentiment alone! Hand cut the 'banner' and a slightly larger backing one from 'Desert Storm'. Again the sentiment was added to the card using thin sticky pads

Your turn to play now - as I said, everyone must have a button to hand. I was just lucky that I had the embossing folder - and it was happy to come out and be used :)