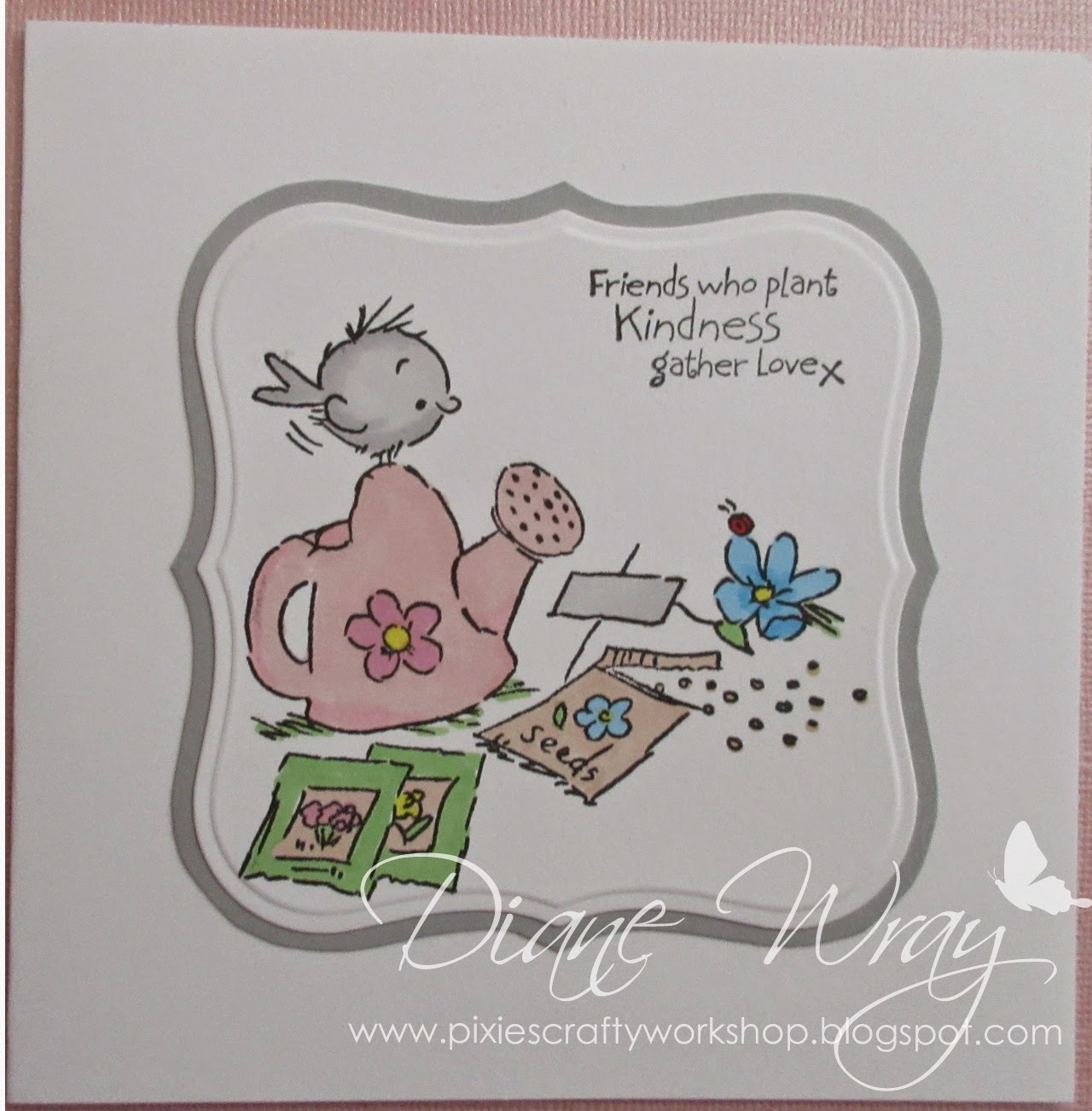 What a great sentiment and the image is so cute. Lovely CAS card. xx

Cute as cute can be. I tried using a pot of Collall the other day and was pleasantly surprised at just how easy it was to manoover. Hugs Mrs A.

Such a darling card, Di!

Stinking cute, love the image with a lovely sentiment!

So cute - and so much to it, without stopping it from being CAS! Gorgeous

A lovely cute card Di, the image and sentiment are perfect!
Kath x

A totally gorgeous image and sentiment Di and love the cuteness too.
Thanks so much for sharing and taking part.
You might also like to link up at Uniko Studio where the challenge theme is Love & Friendship.
Sarah xx
Less is More

This is such a cute image, love the way you've used it. And your 'New Beginnings' card was adorable!
Having a wander thru blog land on a day off. Still in pj's at 10 am - woo hoo!
Hugs
Debs xx

A cute card with a lovely sentiment Di and the shaped layers work beautifully! x

Awww thanks Di for popping in at Uniko Studios too.
Your gorgeous card deserves to shine over there too.
Sarah x

Such a very sweet! Great job on how you made the layers.
I love all these challenges I am seeing. They are very motivating. Now if I only had a clone to sit here at work think of how much playing I could get done!

Awww, this is a really cute card Di! I love that sentiment and I love the image. You colored it up so cute and I love the SB you used as your mats. Hugs, Brenda

Super card, Di. I just love that stamp and the greeting is the perfect one for it too. Nice colouring job. Hugs, Elizabeth xx

Great image and a super card, great choice of colours and die.
I did get the banner image onto my post but when I went to preview (which I don't normally do) the banner had disappeared. I did it time and time again and always the same so decided to try just posting it and it disappeared again, I did plenty of saving during the post so goodness knows what was going on but a few commenters say they are having trouble with blogger one way or another.

Hi Di this is a gorgeous card I do like that stamp. Hugs Jackie

What a cutie Di! At least now it has seen ink lol!
Thank you so much for sharing your card with us at Less is More
Anne
Less is More

This is so cute Di, perfectly coloured. Thank you so much for joining in with the Uniko Challenge and thank you for the baby congratulations. Will make sure I post some pics some baby arrives

Beautiful :) Such a cheery CAS card for a dull day here in the UK. Thanks SO much for joining in on the Uniko Studio Challenge. Hugs Bev x

This is a cute image and you made a fun card with it. I love all the seed packets and the seeds scattered about. It's always great to send a just because card to a friend.

Awwwwh! Love that little bird perched on the pink watering can! Looks like spring is around the corner!

This is so sweet, Di! What a great card for a friend! Sorry that it has taken me so long to get to you in my NBUS gallery. Thank you so much for entering all three times and for your kind words of friendship and promotion! You epitomize your own card!! I hope your eye is all better by now! Love and hugs, Darnell

Di, this is just SO cute and what a great sentiment!
Thanks so much
Chrissie
"Less is More"