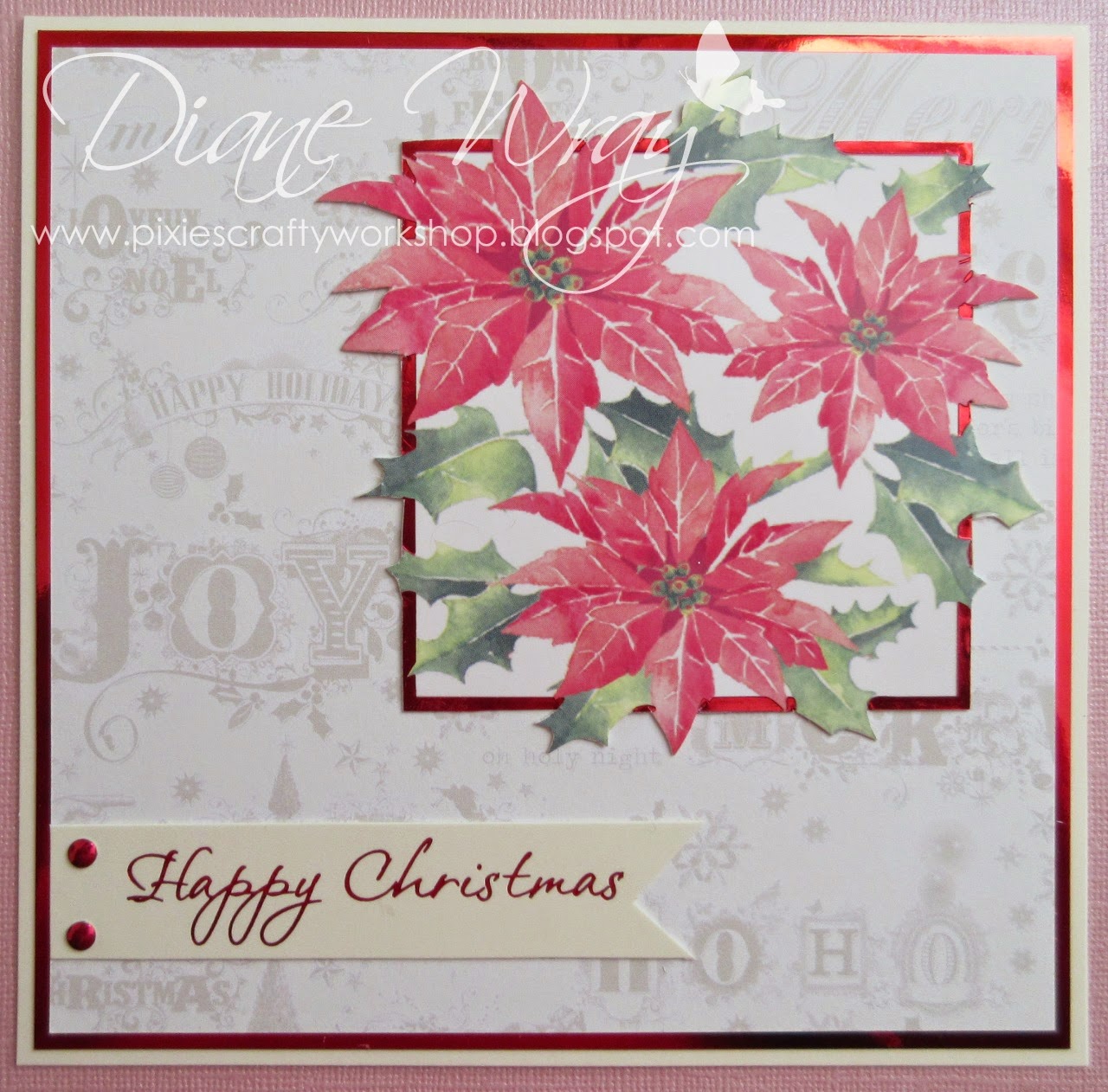 This made a gorgeous card! I'll bet it's prettier than the original!

This is beautiful! I love making Christmas cards all year long. Then there's no big rush in December. But you send many more cards than I do!

Gorgeus poinsettia in pink with wonderful BG PP, love this !

I'm with you all the way Di and it's a great way of getting out the festive NBUS!! This front was a real find, it's gorgeous xx

A fabulous card Di. I've also had several cards this year that will get upcycled for next year!
Hope your eye is feeling a little better.
Kath x

Beautiful card Di, great to recycle what you can. I've had people say to me that they don't keep cards. I put a paper insert in mine so the receiver can then send it on by replacing the insert. Cathy x

Just stunning, I especially love the bacground and beautiful Poinsetta

This is gorgeous Di. Loving the trio of poinsettias.
Hugs
Desíre
{Doing Life – my personal blog}

Nothing better than recycling - I have done some this year too, with old Christmas cards - yours is a real beauty, Di!

I'm very impressed by your resolution and the fact that you've started. I'm not sure I can face another Christmas card for a few weeks. Having said that I'm now going to check out all my received cards for things to save! Your card is beautiful.

Love your recycled poinsettias Di and the red mirri card with that quite neutral coloured background goes perfectly, and all finished with that recycled sentiment. A great make. x

Brilliant card Di and not in the least fed up of Christmas cards. Everything tidied away for arrival of Jude, not one single card made while she was here, then after she had gone Saturday morning thought it was time I made a card and what did I get out... Christmas stuff.???!!!

This is a gorgeous card Di loving the poinsettias and Greetings background beautiful as always........l managed throughout the year to get my card done due to challenges so l think l will be doing the same again for 2015 it really does help......lots take care and all the very best for 2015 xx

This is lovely Di. I must admit I am having a week or two off before making any more Christmas cards, but I will try to keep up with Rudolph Day.
I had to smile at your comment above. A relatively new to card-making friend was sitting with me as we opened our cards at the Wednesday group, and she said she couldn´t help assessing each one for usefulness next year! and I know just what she means. Happy new Year to you and Len.
Kate x

I make Christmas, Valentine and Easter cards all year long, so I don't tire of seeing them! They're a constant source of inspiration - much like this beauty! Keep 'em coming!

great card Di love it (should make more square cards but here they cost more to post :( and l am making next years cards too :D Shaz in Oz.x

Looks wonderful. That is a gorgeous poinsettia...I can see why you wanted to upcycle it.
Still have my cards up on display till after Epiphany and then will be carefully looking over the store bought images and the sentiments too! teehee

Oh my this is a gorgeous poinsettia card Di! I love background paper you used and I love that poinsettia fussy cut from an old card, I think it is so fabulous that you have reused it! I will be doing that too when I take down my Christmas cards this year! I hope to keep working on Christmas cards so I have plenty next year too. Notice I said "hope". lol Best intentions sometimes don't happen with me. But I'm gonna try! Hugs, Brenda