.............at boarding school was punishable by various means, warnings, groundings, having to wear school uniform at weekends so that everyone knew you were in 'deep doggy doo-doo' and very often having to get up and totally strip your bed and fold everything neatly before trooping out of the room to stand at intervals down the corridor. Often this would be until you were almost asleep on your feet - and only then could you return to the 'dorm', remake your bed and inevitably fall straight asleep through tiredness. But, it never stopped us I'm afraid :(

It certainly wasn't St. Trinian's, but there could be similarities! 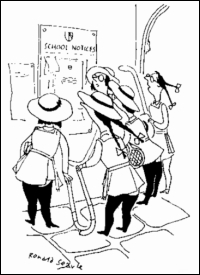 In my first year there I shared a room/dorm. with four others - and naturally there were the inevitable ring leaders. I'm not sure if Moira, who pops in here, was involved or whether she'd had the sense to team up with another crowd to share with by then.

This particular night one of the ringleaders had the bright idea of playing hide and seek in the dark. So, we dutifully counted to the agreed number and then it was time to search for the 'hider'. The rooms weren't massive so it was always easy to find whoever was hiding. But, before the search could begin, our chattering was heard by a member of staff and the room door was flung open - at which point we heard a muffled squeak of pain from behind the door. But, the teacher in question just roared at us to 'go to sleep immediately' and slammed the door shut again. The door slamming was immediately followed by a whoosh, a thump and stifled groans. When we eventually turned on the light there was a crumpled figure on her knees on the floor, in her PJ's, part way across the room.

In an attempt to beat us at hide and seek the 'hider' had been ultra-clever. She'd taken her bed side chair (bit like an old fashioned dining room chair) and hung it from the pegs on the inside of the door, on which we hung our dressing gowns. Then she'd quietly hopped up onto the chair and was sitting suspended up there waiting for the search to begin when the door was flung open. At that point her knees had crashed against the wall but she stifled her squeaks of pain - damaging furniture was another,much more serious, punishment altogether! And of course, when the door was slammed shut the momentum had shot the 'hider' out of the chair and across the room - where she landed on her knees once again! Some of the most spectacular bruises I've ever seen as well :))

Sometimes I wonder how we survived - but I'm so glad we did and to this day I still have Moira as a friend to share our memories! I do remember the name of the 'hider' but that's not essential to the tale - besides which, I don't want to be had up for libel :))