A Tuesday Tale - St. Nicholas Eve traditions, slightly more serious but with a smile at the end

Most folk will have gathered that Moira, who hops in here regularly, and I met up at boarding school absolutely donkeys, and a lame donkey at that, years ago. The school was for children whose Fathers were working in Germany, generally in the Armed Forces. A lot of the staff were German, although the teachers were from the UK, and certain German Traditions were followed. 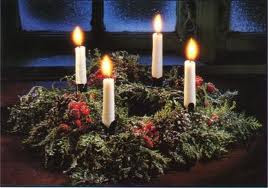 Each December a large Advent Wreath would be suspended in the stairwell of each House. The Houses were three stories high with cellars running the whole length underneath - it had been a U-boat submarine base during WW11 and we were terrified of those cellars - with good reason, we discovered many years later. The ground and first floor were made up of our rooms, staff flats and dormitories then the top floor was attic space with a massive 'prep. room' where we did our homework, wrote the obligatory weekly letter home every Sunday (those letters, in the first term at least, often begging to go home!) and held little socials and dances (the school was co-ed so there were boys to dance with too!) and so forth.

During Advent, until we all went home for the Christmas hols., each Sunday evening there was a really beautiful tradition. After our supper (generally cold meat and pickles on a Sunday evening) and just before the little ones had to go to bed we would all get into our PJs and dressing gowns (remember those floral nylon quilted dressing gowns - yeah, me too!!). Then we would all gather round the steps around the stairwell banisters from top to bottom, the Advent candle(s) - one more for each Sunday in Advent - on the wreath would be lit and we'd sing a selection of Christmas Carols. 'Stille Nachte' (Silent Night) was always a 'must' and even our stern Matron Frau Habercost who, despite us lived to the age of about 100, could be seen with a little tear in her eye at the freshly scrubbed faces, illuminated by candle light, all chirping their hearts out. Thinking back, it must have been very moving and I still remember it as a very special ritual.

The House Matrons were all German ladies, and every 5th December, there was another little ritual. In Germany, St. Nicholas calls on all children on that evening - known as St. Nicholas Eve - and leaves a little pre-Christmas treat or two in their shoe. Our Matrons used to tell us that the shoe we left outside our room/dorm. door had to be bright and shiny otherwise we might not get a treat. Needless to say, on 5th December there was a little hive of activity, brushes and polish flying round, in the 'boot room' where we kept and cleaned our outdoor shoes, hockey boots, wellies and such. And sure enough, the following morning there would be a little cellophane packet in each shoe containing chocolate and other little treats when we woke up.

And, it was also really easy the next morning to spot the more 'tardy' amongst us ......wearing one bright and shiny shoe and the other one totally unpolished..... in all the excitement and rush to nip into bed and fall fast asleep, lest we didn't leave at least the one shiny shoe and St Nicholas didn't call!